The genomics brand brings together 29 descendants of the founding fathers for an atypical July Fourth campaign.

Many marketers have tried to co-opt various social and political issues through their campaigns. Some have been successful, like Corona and 84 Lumber, which tackled immigration head-on by putting President Donald Trump’s proposed border wall front and center of their advertising. And others have whiffed, like Pepsi, which placed Kendall Jenner in the middle of the Black Lives Matter movement.

"This campaign is literally about speaking to America," Ancestry CMO Vineet Mehra said. "We are just trying to show that through actual fact, through direct lineage, those founding fathers have left behind descendants that are so diverse, come from so many walks of life, that we hope that we can play a small role in shaping and showing America as it is today."

For two weeks, Ancestry will air the minute-long ad through digital channels, including a YouTube homepage takeover, and on television. The brand will also erect a digital billboard in Times Square in addition to tapping PR agency Weber Shandwick to direct its influencer strategy, which is still in the works. For those who want to learn more, Droga5 produced video testimonials from those featured in the commercial, like an African American Rev. W. Douglas Banks, whose grandfather is Thomas Jefferson. 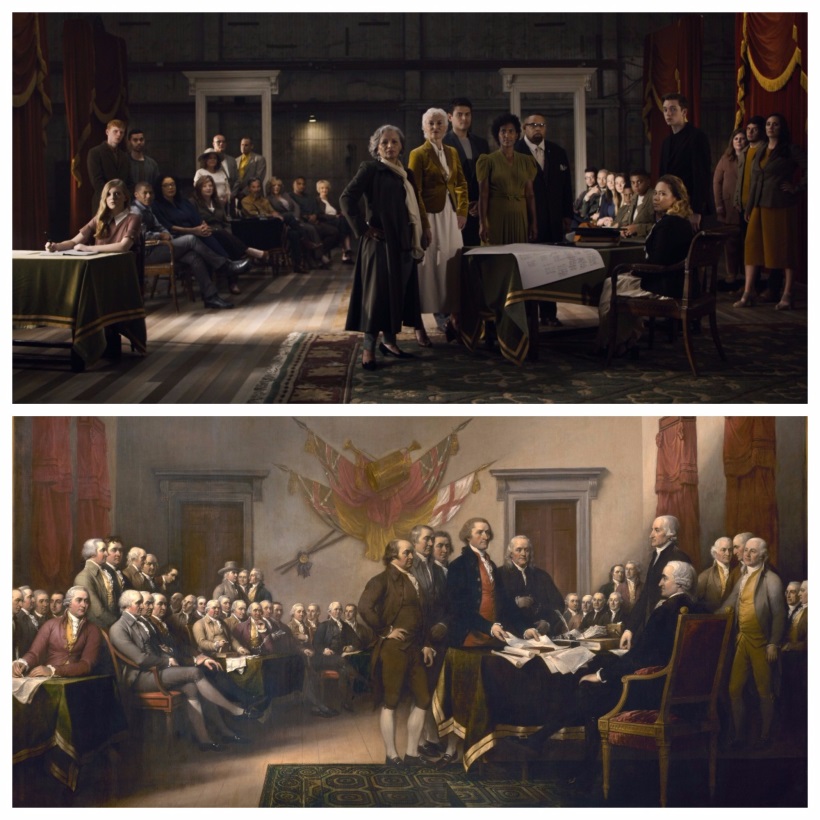 Above: Ancestry's commercial. / Below: Trumbull's painting.

"The idea here is to create a system of work where you can watch the film and take it at face value, or you can dig deeper to the individual stories of the descendants featured in the film," said Droga5’s Co-Head of Strategy Colm Murphy. "That’s supposed to reflect exactly how the product works, which is the deeper you dig into it, the more rewarding it is."

Ancestry, which first launched in 1983, offers two products: one that maps family trees and another that connects customers to "Genetic Communities" through a DNA sample. Although both are not mentioned in the ad, Mehra said the company’s genealogists used the family tree mapping to find the signers’ descendants. This shift from product-focused to brand awareness marketing is part of the new direction that Mehra—who started in January—is taking the business.

"Number one, we are trying to solidify our role in American culture. We are a well-known brand, but" Ancestry is trying to reach "that iconic brand status," he said. "Trying to live as a brand that shapes culture, doesn't just sort of live within it, is something we are really aiming to do here."

And that’s why Droga5 and Ancestry timed this ad with the July Fourth holiday.

"A lot of brands try to own cultural moments," Mehra continued. "But I think very few can own a moment like this the way we can because our product directly connects people to these folks that actually signed the Declaration of Independence."

"What separates our sort of ability to do advertising like this is the notion that these are facts," he said. "This is not opinion. We are not kind of aggregating diverse groups of people together to just sort of make a point."

Instead, Mehra claims Ancestry’s goal is to connect people literally through its genealogy tools and metaphorically by showing the founding fathers’ descendants reflect America’s melting pot. Another hope is to create a sense of urgency to sign up for its products.

"We are a brand that's seeking to not just understand your past—but you saw the tagline—we are really shifting our focus to understand your past to inspire your future," Mehra said. "We really feel like there is this notion of urgency that we can drive in people. A lot of people say the past is not going anywhere, I'll do it anytime I want. But if we can reframe the past as a key way to change what you may do tomorrow, I think that's a big part of what we are trying to do in this campaign."

On Eclipse Day, advertisers shoot for the moon

The inside story on The Daily Show's Trump Twitter Library

5 ads that wave the flag for the Fourth of July

23andMe partners with 'Despicable Me 3' for first movie partnership