Amazon Prime Video Sport is calling on artists and designers to submit ideas, but will only pay for winning ones.

Amazon has found itself at the centre of a Twitter row over whether designers should ever work for free on spec, after it tweeted to say it was looking for "eye-catching designs" in exchange for "cash prizes".

The global tech and retail giant's sports arm tweeted on Friday that it was looking for "designers and artists" as well as "football fans around the world" to submit "eye-catching designs that embody the spirit of football based on Premier League club crests".

Amazon Prime Video Sport tweeted a link to a page hosted by Talenthouse, which is managing submissions and said it would select 15-20 of the best designs, paying £1,000 for each.

Talenthouse, which describes itself as connecting creatives with opportunities for paid work via an "open-sourcing model", said on the site that alongside getting paid, "Potentially [having] work seen by Amazon, Premier League football clubs and players" was an incentive to submit work.

The winning artwork will be used on Amazon and Premier League football club social media channels to promote the fact that Amazon Prime Video Sport will live stream 20 Premier League games in December.

Taking to social media about the page, some slammed Amazon for commissioning work this way. One tweeted "Why not just hire people and pay them a wage?" and another urged: "HIRE DESIGNERS. You have BILLIONS of dollars. Stop insulting the design industry with this garbage." 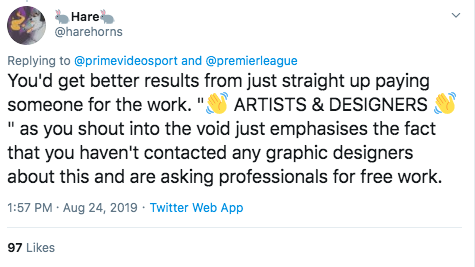 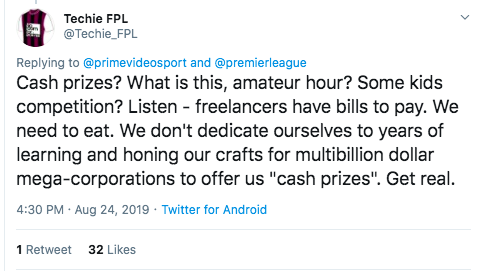 Talenthouse defended the call for artists and designers to submit work on spec. It said it had "heard this criticism of the open-sourcing model several times since our launch 10 years ago".

Co-founder Maya Bogle denied it was a competition and instead claimed that this method of connecting creatives with opportunities was "a way of liberating and democratising creativity" and giving people the opportunity to be paid, gain recognition and develop their portfolios.

She said Talenthouse was "proud" of its brand partners, such as Amazon, which helped give creatives "a way of getting their work under the noses of industry experts and brands that would simply not be possible without platforms like Talenthouse".

"Ultimately, every brief that we host details the exact requirements, opportunity and financial reward for the creator, so this is a voluntary process that they choose to participate in," Bogle said. "And after 10 years of doing this, we know that creators want and need brands and platforms like ours to create opportunities for them."

Almost half of UK homes have a TV streaming subscription