With the coronavirus pandemic forcing consumers to shop online in greater numbers than ever before, it seems counter-intuitive that Google would decide to make search listings in the Shopping tab of its search engine free.

Citing the fact that digital commerce has "become a lifeline for retailers", Google’s president, commerce, Bill Ready, announced that the company was making it free for merchants to list products on the Shopping tab, regardless of whether they are advertisers.

"As consumers increasingly shop online, they're searching not just for essentials but also things like toys, apparel and home goods. While this presents an opportunity for struggling businesses to reconnect with consumers, many cannot afford to do so at scale," Ready said.

These changes will take effect in the US before the end of the month and Google wants to to expand this globally before the end of the year. Plus, it will enable retailers to link their accounts to PayPal to speed up online transactions in order to compete with Amazon, which saves consumers’ credit-card details to enable one-click buying.

Google has an eye on 'shrinking marketing budgets'

David Coombs, head of strategic services at Cheil UK, told Campaign that Google's move was definitely aimed at competing better with Amazon and the search giant needs as many retailers on its side as possible.

"Google’s management will also be keenly aware that increasing numbers of product searches are shifting from Google to Amazon," Coombs said. "This is something the business will want to wrestle back quickly. And by offering free listings, it will be hoping to grab a greater share of those all-important shopping clicks. Google will also, I’m sure, have one eye on shrinking marketing budgets, so offering free listings is a sweetener for those already paying for search listings."

Farhad Koodoruth, co-founder and chief data strategist at Threepipe, a performance agency that specialises in ecommerce on Amazon, said Google’s play is interesting because it gives marketers an easier way of being able to transfer from organic to paid search in the future.

He said: "The impact on how people are spending within the main feed isn't going to be that big a deal. What is interesting, though, is it brings in the product feed into the same place that your pay product feed is; it gives you a much easier way of being able to transfer from organic to paid in the future. It does make the shopping proposition a better one and more like the way it used to be, where it was more heavily used.

"It’s an interesting play because it brings back the range into the shopping product. I think what they're going to try and do is create some sort of hybrid where you can push your products more into the paid side of it from the organic side and choose a combination between the two things."

Making it easier for marketers to switch ecommerce tactics

Depending on what market you look at, somewhere between 50% and 55% of product searches are now happening on Amazon rather than Google. The problem is that Amazon only serves up products that it sells, whereas Google will serve any product that is linked to a web page.

Koodoruth, therefore, believes Google’s decision is part of a wider move to make it easier for marketers to more easily switch between having some products organically searchable and some having paid-for listings.

He noted: "By actually increasing the overall flow into the paid section will then make cost-per-clicks go up and create more inventory… you can then choose to show some of your products just organically, some of your products paid, and what the right combination strategy for you happens to be, as well as getting to invest in a bit more optimisation." 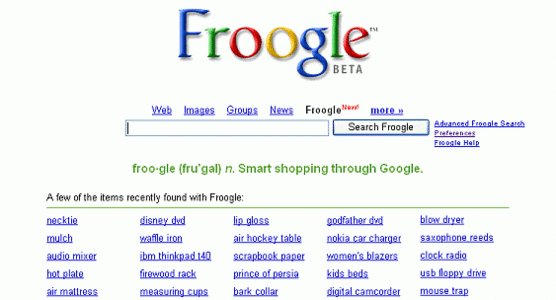 Google Shopping was free when it launched in 2002 – it was even known as Froogle (pictured, above) – but lost a significant amount of product listings when it moved to a paid model, Koodoruth added. This means that the depth of product searches is relatively weak, because online shoppers can only compare a product’s price and availability on the big online retailers that pay for listings on Shopping, such as Amazon and eBay. This is suboptimal for Google, which ostensibly wants to be the world’s go-to shopping comparison site.

Coombs points out that when Google Shopping was free, the company was able to make money in other ways, specifically via the promoted listings for top placements, which will continue as normal.

"Will it stay free? This is hard to say, but I would imagine they will look to monetise again if they see the growth they are hoping for," Coombs added.

However, this means that once Shopping becomes free to list on, the biggest beneficiaries should be those existing big retailers – Amazon and eBay. Instead of being a help to struggling retailers during the pandemic, it could actually put them at an even greater disadvantage as people are forced to continue to shop online in the coming months.

"If Amazon don't list every single product they have on Google for free, I'd be amazed, and it will be shortly followed by eBay," Koodoruth predicted. "So, actually, the biggest beneficiaries of that are going to be the people that hold massive stock catalogues in the first place – the two biggest ones being eBay and Amazon, who were probably least in need of Covid-19 support than anybody else in that market."

Tom Nash, OMD UK’s managing partner for performance, said many clients ask his agency whether they have the option of listing Amazon fulfilments on Google Shopping and pointed out that Google’s terms of service restrict them from controlling the listings.

Plus, Amazon doesn’t seem bothered about doing that anyway, Nash explained: "They're very selective at the moment, primarily around looking after their own profit margin and looking at driving margin where they believe they can realise that revenue."

What marketers should do

However, while Nash believes Google has the potential to be a viable ecommerce marketplace to compete with Amazon and eBay, he thinks the company has underinvested compared with its many other tools and services.

"This is hopefully going to be the start of further attention and investment going into this area… the PayPal integration definitely talks to that as well. PayPal is obviously a household name from a transactional payment perspective and adds immediate legitimacy to the platform."

So how should marketers to respond to this?

Koodoruth advises that they should be already running paid ads on Google from a product listing point of view, because it's one of the most efficient direct sales channels.

However, the free opportunity will enable marketers to understand how to use a combination of paid and organic search more effectively.

He explained: "There might be some products that they can't sell because their price is too high, their margins too low, they have 47 resellers of the thing – whatever it happens to be. So I think what it allows you to do is actually build a strategy that's more about understanding how to leverage both parts of that conversation.

"Getting everything up for free is a good starting point to understand the mechanics of how to optimise a feed and increase your visibility. You can learn how to do this stuff for free and understand how you need to change your product feed and get your images right and all the other bits and pieces, which will better prepare you to spend your budget better in the future."

As shoppers flood online, meet the next frontier of the gig economy: CX

Talent? Required. Degrees? Not so much