Channel 4’s top brass has warned that government plans to privatise the business would seriously affect its ability to provide purpose-driven content and be likely to result in regional office closures as the broadcaster scales its investment.

An Enders Analysis report has valued the business at £600m-£1.5bn, and said the public asset would appeal only to commercial TV rivals, such as ITV or Sky, or an international media company that already has a UK presence, such as Channel 5 owner Viacom or Discovery. This would rule out interest from global streaming giants such as Netflix or Amazon.

A public consultation on privatisation ends next week, at a time when the broadcaster is on track to deliver its strongest ever month of revenue.

In what was a clear warning against government plans to sell off the public broadcaster, Channel 4 chief executive Alex Mahon told a media briefing yesterday that privatisation would have a detrimental impact on its ”economic, social and and cultural” contributions to the UK.

This includes investing in purpose-driven content and programming that targets young people, as well as investing in new jobs and productions outside London.

Yesterday (6 September), Mahon, chief operating officer Jonathan Allan and chief content office Ian Katz shared their views on privatisation and an update on how the broadcaster has been performing against its five-year Future 4 plan from its new headquarters in Leeds (pictured below). 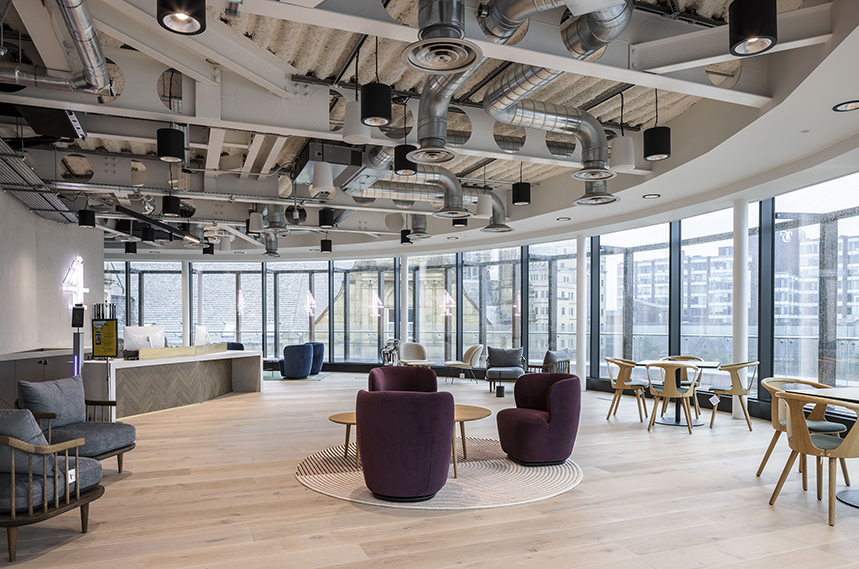 The broadcaster also has offices in London, and creative hubs in Bristol and Glasgow, plans to fill 400 roles in regional areas and is on track to spend 50% of its content budget outside the M25.

Mahon said that if Channel 4 becomes a for-profit commercial TV broadcaster, there would be “clear trade-offs to consider”.

“For most of my career, I've run commercial businesses or worked for private equity-backed companies,” she said. “These businesses are run with different end goals than Channel 4. They're ultimately about prioritising the generation of profit. While Channel 4 is run commercially, that is done solely to create revenue to fund the delivery of our public purpose without costing public taxpayers.

“Although it's helping to build the UK creative clusters and level up the nations and regions, it would not make much sense commercially for a small company to maintain five different locations, and it would affect who we work with.”

Katz said most of Channel 4's purpose-driven programming goes beyond current remit quota requirements and would be “unprofitable and lost” under a profit-driven ownership.

One recent example is Channel 4’s coverage of the Tokyo Paralympic Games.

“The programming that makes Channel 4 so unique might, I fear, be lost to create profitable returns, and we would need to radically reshape our editorial mix,” he said. “Without a doubt, this would result in less risk-taking, fewer programmes with real societal impact and fewer opportunities for new talent.”

Channel 4’s "publisher-broadcaster" model, in which it outsources productions, mostly to independents, would also be under threat, Mahon warned.

“We have not seen any evidence that the irreversible change of privatising Channel 4 will be in the interest of either British audiences or the UK economy,” she added. “It could well have serious and long lasting consequences for our world's leading television production sector.”

It is not only Channel 4’s senior executives who are concerned about privatisation. ISBA chief executive Phil Smith told Campaign that advertisers are worried about an ITV acquisition, which would create a single TV broadcasting group that controls more than 70% of the TV advertising market and cause “distortions”.

Although there are currently constraints around bidding, Smith said there are already distortions in the equation of station average pricing and he has concerns that an ITV-Channel 4 merger could lead to a lack of transparency in pricing.

He added: “We do like the status quo and value what Channel 4 has done in bringing diverse and different audiences to advertisers, especially when you consider that the weekly reach for younger audiences on TV has been in decline.

“The remit of distinctive programming is not something that would be undertaken by a new operator if they are looking to optimise commercial returns. The Enders Analysis report said it is likely a new owner would look to game the current remit.”

Smith said tie-ups with ViacomCBS/Channel 5, or even Comcast/Sky would be “less disruptive”.

The concerns about privatisation surface at a time when Channel 4 is predicting record revenues and is ahead of schedule on its plans to transition to a digital-first media company with a strong young audience.

“This growth, together with our digital transformation strategy, is ensuring the channel is thriving,”  Allan said.

The digital transformation at Channel 4 has been rapid. In 2020, 19% of its advertising revenue was digital, well above the rest of the TV market average of 12%, with plans for it to comprise 30% of total ad revenue by 2025.

Digital viewing on All 4 is forecast to rise to 1.5 billion this year, and reach a 2025 target of two billion.

Meanwhile Channel 4’s reach of younger audiences across its social and digital media assets – more than 90% of 18- to 34-year-olds – gives it the widest reach of a youth-focused media company in the UK, ahead of Ladbible.

This makes the broadcaster an appealing prospect to advertisers, and Allan confirmed that advertising would play an important role in Channel 4’s revenue mix for the foreseeable future.

How that future plays out could depend largely on the outcomes of the government consultation and whether it presses ahead with privatisation.

‘4 The People’: ad industry letter calls for Channel 4 to stay in public ownership

Channel 4 and TikTok team up to showcase Tokyo 2020 Paralympics

Channel 4 debuts real-time bidding on All 4