The rise of artificial intelligence could seriously undermine the role of marketers in future, according to the UK marketing director of Just Eat.

"You’ve got to be careful that marketers are not just run by spreadsheets and robots and data," Ben Carter told a Campaign breakfast briefing, called Profiting from AI: The Business Opportunity, in association with M&A firm Results International.

Carter emphasised that AI has many benefits but he said: "As a marketer, this conversation terrifies me."

He explained: "Data is massively important. But you’ve got to balance data with human gut feeling. In terms of AI running marketing, that’s an absolutely terrifying prospect."

Carter believes that AI will not become pervasive in business for 15 years.

"I think I’ll be alright," he said, referring to his own career. "But I’m more worried about the marketers of the future. It’s really depressing."

He recounted a recent conversation with two new recruits to Just Eat’s marketing graduate scheme who were going to be learning about data and automation.

"They both looked at me terrified and I thought, ‘what’s wrong?’ and they said: ‘I don’t want to spend six months staring at spreadsheets,’" Carter said.

He stressed that Just Eat, arguably the UK’s most successful consumer tech business after winning admission to the FTSE-100 index this week, is eager to experiment with AI.

The online food-ordering platform has built a Facebook chatbot and was a launch partner on Amazon’s voice assistant service, Alexa, as it has sought to engage consumers and generate orders.

However, Just Eat has also invested heavily in traditional marketing, including sponsorship of The X Factor on ITV and TV ad campaigns, to build its brand.

Over 40,000 people have used Just Eat’s Facebook chatbot since it launched last September and more than half have gone on to make an order, Carter said.

A customer can do something as simple as posting a pizza emoji to the chatbot to begin a dialogue with Just Eat.

"What it shows you is there is a use case now for chatbots to aid that transactional journey," Carter said. 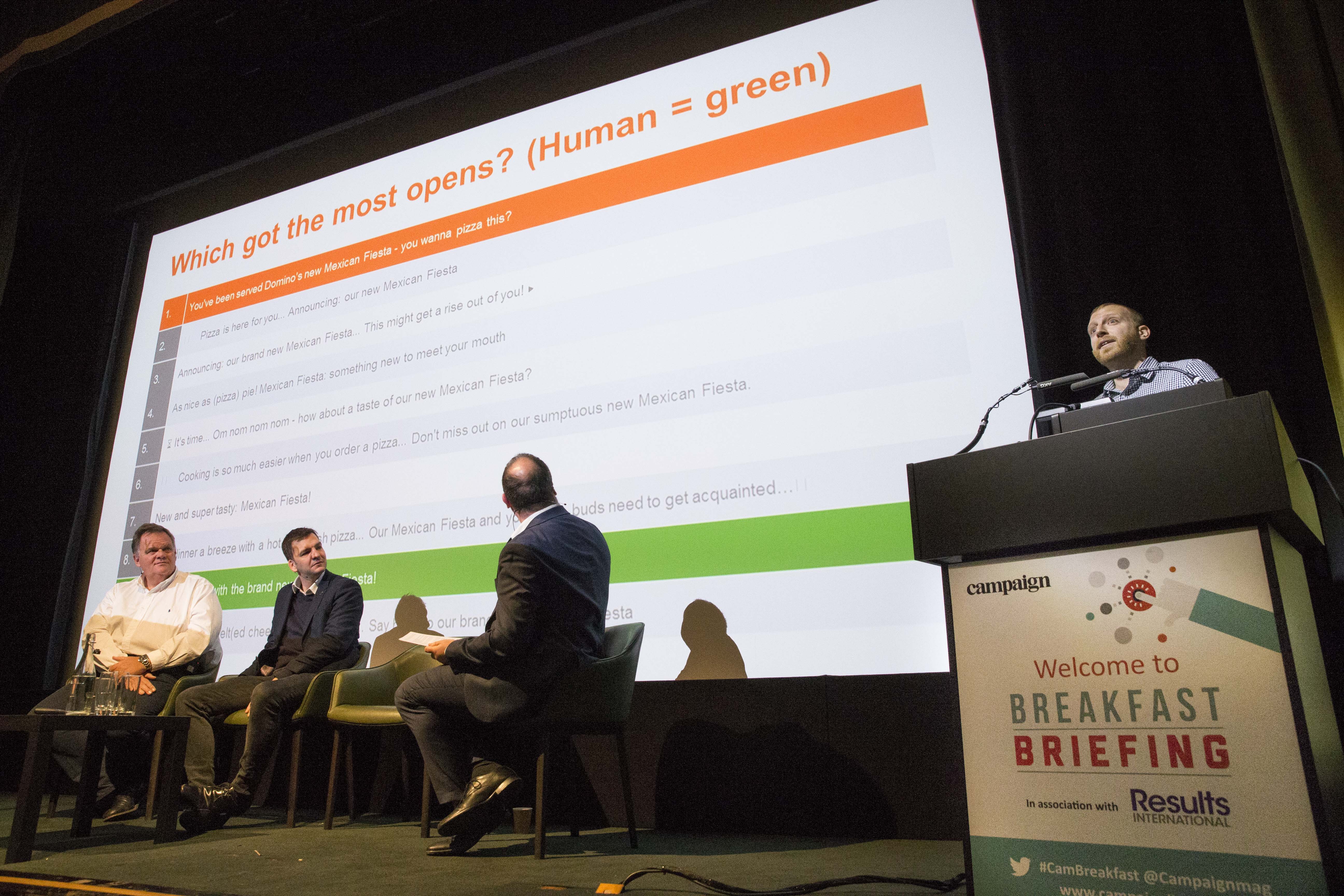 Malm carried out an experiment with the audience at The Regent Street Cinema, asking them to look at 10 email subject lines for a pizza marketing campaign and pick which ones had been written by AI and which ones were written by humans.

Few in the audience were able to detect that a human wrote only one subject line and it was among the least successful in prompting users to open the email, based on Phrasee’s previous testing.

The result showed that "we all think we’re experts" but "humans suck at predicting" because "we have our own cognitive bias", Malm said.

Kjærsgaard said AI offers "endless" possibilities and suggested healthcare is the sector most likely to be disrupted by AI.

"Everywhere where we can get data and facts, then we need AI to come up with the right recommendations," he said.

However, Kjærsgaard believes AI won’t be able to be creative in the near-future because it "cannot cope with feelings yet".

Mark Curtis, chief client officer and co-founder of Fjord, Accenture Interactive’s design agency, who also spoke at the event, said in a short, keynote address that AI was likely to have a profound effect on brands and their relationship with consumers.

He explained how a brand is likely to combine personal information on a consumer and automation to change its message and personalise it subtly – by "mirroring" each customer’s interests.

"It effectively means, at least at one level, brands splinter into hundreds of thousands, if not millions, of different sub-brands – all of which are appropriate to that particular person in that particular moment," Curtis said.

"The brand itself is changing shape to be a little bit more like the person it is talking to."

He warned that is one of the biggest questions facing brands and marketers in the next decade.

The benefit of AI is that it can take mundane tasks "off the thinking list", leaving humans to focus on more sophisticated activities, Curtis added.

Julie Langley, partner at Results International, said: "Everyone recognises, whether I’m a company in manufacturing or HR or advertising, I need to be building AI into what I offer."

A very modern marriage: Cognizant's deal with Zone and a shift in balance of power

Former Tesco CMO Tim Mason: I can't say for sure Amazon will still be around in 20 years

Just Eat's Dawe is named Marketing Leader of the Year