Cole Habersham shares early trends from the viral Google Doc home to agency staff pay from all over the world.

No, Cole Habersham isn’t unhappy at his job.

It’s a conclusion many have been quick to draw after the R/GA account manager created a public spreadsheet for advertising agency workers around the world to anonymously reveal their salaries in a search for greater pay clarity.

"People have been asking me a lot," said Habersham, laughing. "I’m actually very, very happy at R/GA. It is a great agency with diversity and inclusion at the heart of much of what we do here. And the support from leadership has been great to see."

The 26-year-old, who has been at the shop for around 18 months, launched the Google Doc a couple of weekends ago after learning that his friend, a female woman of color, had been given a promotion but only a "cost-of-living" pay raise.

His decision to create the spreadsheet was fuelled by "Real Media Salaries" -- a similar template for journalists which has gained notoriety in recent weeks. 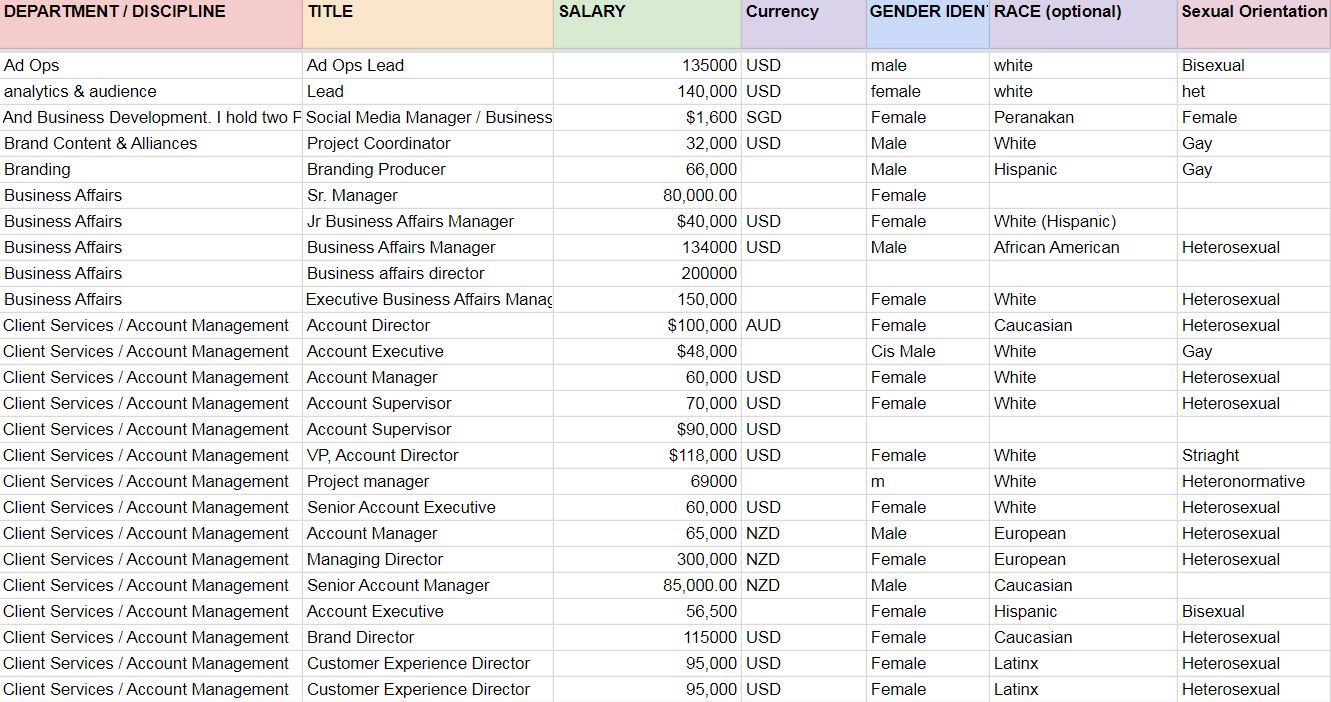 He told Campaign US: "The goal is to create a platform that will provide people of color with a resource to understand what they should be getting paid and better negotiate compensation for themselves during interview and performance review processes."

As a black man who identifies as gay, both race and sexual orientation were important criteria to lay out in the spreadsheet. The doc also asks participants to share: department/discipline; title; currency; gender identity; years of experience; country; city and; whether you work in-house or externally.

"I’m just not seeing many entrants from people of color -- and particular women in color -- in more senior levels," explained Habersham, speaking to the obvious early trends. "The number falls flat once you get past the manager level. It wasn’t surprising, it was to be expected, but it was tough to see that confirmed.

"Beyond that, it was interesting to see broadly how varying disciplines get paid. When you’re looking at director level, it’s interesting to compare what the average account director salary is versus a creative director and so on. And how wide the range is. To see junior employees making $40,000 in New York, which may actually be illegal, up to a chief strategy officer getting half a million dollars."

Over the coming weeks, Habersham and a team of agency friends will dismantle the data, analyze it and offer some official findings. However, one problem that will hinder and continually undermine the process is that there is no way to officially verify the data's authenticity.

Meanwhile, the number of participants continues to grow. There were more than 3,500 entries to the sheet as of Sunday. Real Agency Salaries has been given a permanent home on Instagram.

The account manager added: "We’re going to be looking at quantifying this more and adding some color to the story with averages among gender and race and sexual orientation. Hopefully we will have some strong insights to share."