Campaign US rounded up 10 of our favorite festive cards and activations.

2021 was another whirlwind year filled with hybrid work, supply chain issues and a looming sense of uncertainty about the pandemic.

To lighten the mood during the holidays, agencies did what they do best: flexed their creativity to spread some holiday cheer through original holiday cards featuring music, charity and plenty of humor.

Here are some of Campaign US’ favorites. 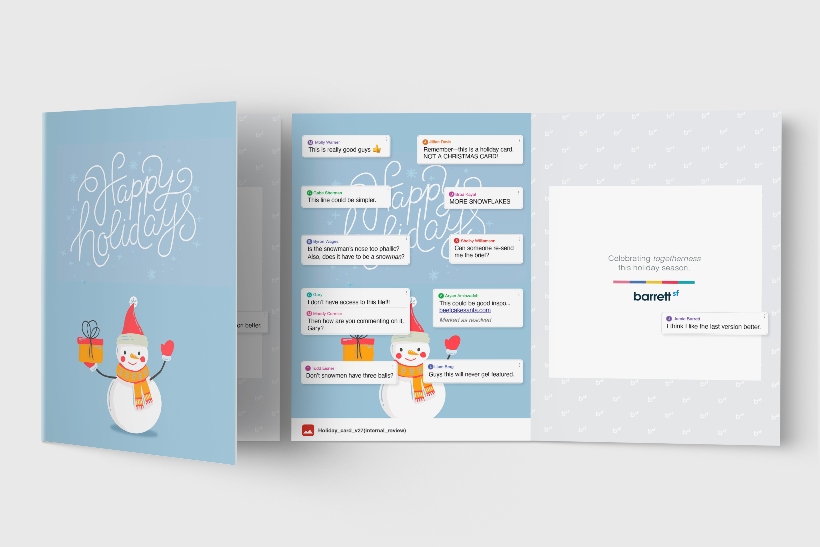 BarrettSF’s holiday card features a snowman — but it might need some work.

To demonstrate the creative process, the card is filled with Google doc suggestions including, “Is the snowman’s nose too phallic?” Another adds, “This line could be simpler,” regarding the card’s “Happy Holidays” title. Meanwhile, others are having technical difficulties. “I don’t have access to the file,” one person writes while another says, “Could someone resend me the brief?” 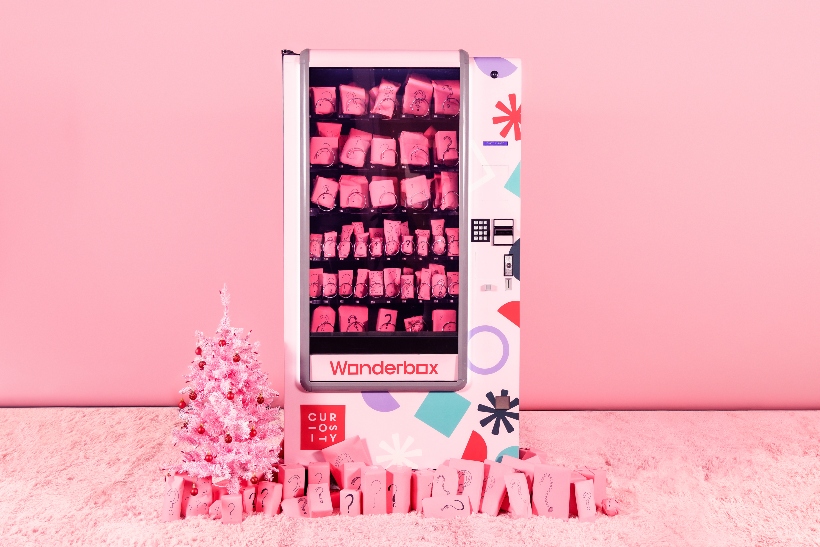 Curiosity is hosting a telethon-holiday gift event on December 15 and December 22. The independent agency created the Wonder Box, a vending machine filled with mystery gifts. People can schedule time slots to join Curiosity via Zoom and tell the hosts which button to press to receive a mystery prize. Prizes will be shipped via USPS just in time for the holidays.

Empower is celebrating the season with “The Window Gift Guide,” a holiday window takeover at its offices in Chicago and Atlanta, as well as at its Cincinnati headquarters.

The theme is “The Retail of Three Cities,” and each window features items from local shops. Passerby can scan a QR code to learn about live shopping events, products and local retailers. 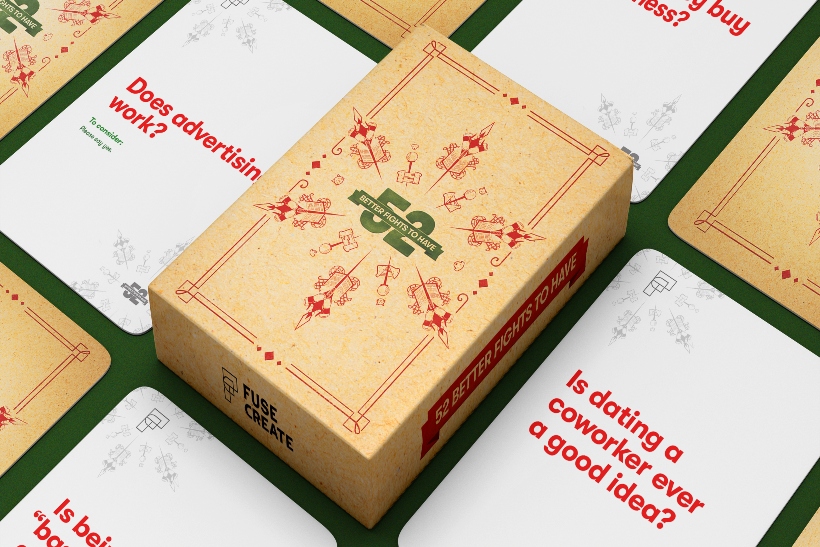 This is the first year many people are reuniting with loved ones for the holidays since the start of the pandemic. People’s social skills might be a little rusty — and the potential for family fighting is high.

Fuse Create decided to ease the tension with “52 Better Fights to Have,” a deck of cards with suggestions for safer arguments families can have over the holidays. Debate questions include “Does advertising work?” and “Is dating a coworker ever a good idea?”

Made Music Studio created a 10-minute meditative sonic project to decrease holiday stress. The video includes audio elements, such as beat entrainment, white noise and biophilic sounds, that are proven to reduce anxiety.

The music agency also donated to The Loveland Foundation, a nonprofit which supports healing and therapy access for Black women, on behalf of clients and partners.

Movers+Shakers, known for its original TikTok jingles, is out with an original holiday album called “All I Want for Christmas Is Views,” voiced by the creative agency’s team. The album features five original songs inspired by the most meme-able moments of 2021. Tunes include “12 Slacks of Friday” and “Silent Zoom.” Listeners can tune in on the agency’s website, Apple Music, Spotify and TikTok.

Supply chain delays are looming over this gift-giving season, but Periscope doesn’t want delayed presents to ruin the holiday spirit. The agency’s “Forever Holiday” digital card features a decorative holiday village filled with porcelain residents. One villager explains his town is excited for the delayed holiday because it means he will be on display longer.

“Happy holidays, whenever they arrive,” the tagline reads.

Planet Propaganda passed the microphone to Sage Santa, voiced by veteran stage actor James Ridge, to share some holiday advice this year. The agency created a digital advent-style calendar that will release a new video every day starting on December 13. Santa gives advice on everything from decorations and authenticity to nutmeg.

RPA’s holiday quiz helps people determine which of four charities the agency will donate to on their behalf, based on their answers. Questions include favorite holiday party, cocktail and gift.

After a difficult couple of years, we could all use the gift of laughter. Children laugh 400 times per day, while adults only laugh 15 times per day, according to Maine-based creative agency Via. So the agency created the Gigglr Counter, an original biofeedback system that monitors laughter by measuring the diaphragm.

The Via team tested out the Gigglr Counter while watching funny clips, and those that received the heartiest laughs are featured on the agency’s website.

Via is also donating $50 to charity on behalf of its clients, and $5,000 to the Make-A-Wish Foundation.