When people drift back to work, things (both physically and psychologically) will be very different. And maybe this will be for the better.

While many employees might not be planning on rushing back to the office any time soon, behind the scenes a considerable number of staff from HR departments, facilities and management have been busying themselves in preparation for the eventuality.

The implementation of business-continuity plans to make agencies Covid-19-compliant will have been unlike anything they’d have rehearsed previously. These plans include a number of practical steps and building reorganisations that involve consistent – and common-sense – industry-wide measures.

For example, when employees who choose to return to their offices, whether that is on a part- or full-time basis, they will notice that they are likely to be encouraged to come in at staggered times (and some may even need to book in advance). There are likely to be signposted one-way systems throughout and around the building, limited capacities in lifts, touch-free hand sanitisers and desks marked with stickers on whether they can be used or not – all to comply with social-distancing rules. "High-touch" items – for example, newspapers, kitchen cutlery and bin lids – are likely to be removed. 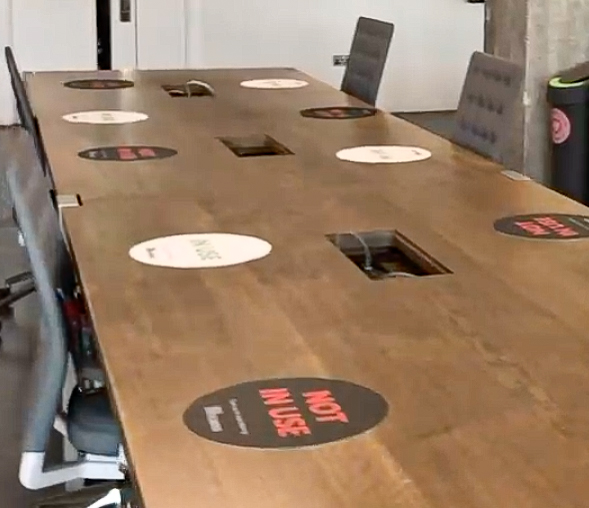 Some staff and visitors may also be required to use face masks and disposable gloves, or even undergo temperature checks (subject to government recommendations), before they are allowed in at all. In time, complying to such rules might become as commonplace as the cursory flick of the security badge to the person on reception.

Hot-desking will be actively discouraged, with people working in the same collaboration zones, which must be cleared at the end of the working day. Canteens will be shut and large, open-spaced areas will now be used as meeting areas, instead of the poky rooms of old. Meetings with external people will be conducted online and deliveries monitored. The offices are likely to be considerably cooler, too, as air-conditioning units will be continually pumping in fresh air from outside rather than recycling existing air around the building. The smell of cleaning fluid may prevail rather longer than usual, as offices and desks are deep-cleaned more regularly.

Michael Frohlich, chief executive of Ogilvy UK, has been working with his executive team almost since shutdown began on how to reopen the building, in some form, as part of the company's business-continuity plan. After implementing many of the measures mentioned above, he gave the almost 1000-strong staff a guided tour of the building on Zoom last week during one of the agency’s regular town hall meetings, so that they knew what to expect and how their Sea Containers headquarters would operate when they return (and he’s not expecting more than 50% of them back before 2021). The building, like many, now has taped-off areas showing direction of travel, plus markers on where people can and can’t stand or sit.

Sarah Golding, chief executive of The & Partnership London, has also tested out the new office, but both her and Frohlich say they have run focus groups to understand how people were feeling about the prospect of returning to the office before making their plans. Neither expects – or needs – everyone who previously worked in the office to return, not only because it has been proven that many tasks can be undertaken from home, but also because some staff might be feeling anxious about returning. Public transport, in particular, is a worry for those who work in central London. The & Partnership has also increased the provision of bike sheds and access to showers for those who choose to run or cycle in.

Over at Publicis Groupe UK, Philip Chin, president of Europe at Publicis Health, has been leading the office reorganisation and communications plans. He says: "The measures and actions we have undertaken form the basis of our STEP (safety, travel, environment, people) forward plan. The key measures and actions include: communicating the details of our STEP forward plan with all of our people well ahead of any reopenings, so that everyone knows what to expect when they return to the office; and, most importantly, how everyone needs to behave to keep themselves and others safe in the workplace."

Chin picked the Chancery Lane office as the first of its UK campuses to reopen, from which the company will learn and adapt, if necessary, for the reopening of the other buildings. "Chancery Lane campus was selected because of its proximity to mainline railway stations, giving people the opportunity to walk to work from the station, thereby reducing the need to use the Tube or bus, and also freeing up space for other members of the public to use public transport," he adds.

Golding emphasises: "One of the most important aspects of our approach is that anyone returning to the office is doing so voluntarily. For the foreseeable future, we will not require anyone to attend if they are not comfortable to do so."

Ete Davies, chief executive of Engine Creative, also stresses that staff safety is paramount and the old concept of presenteeism that was so commonplace has finally been consigned to history (one happy consequence of coronavirus, at least). "Ultimately, we want everyone to be comfortable and safe whilst we transition out of lockdown," he explains. "Engine has for some time now championed fluid working, which is underpinned by a performance culture and not an attendance culture. So our starting point going forward is that for most people the majority of their time will still be spent working from home, with the option to come into the office flexibly."

As well as introducing many of the physical safety measures mentioned above, Davies is clear that it’s important to provide help and support on how to use the building. Frohlich has gone further, introducing psychological support measures for those who will be in the office and those who won’t, so that the latter don’t feel that they are either missing out or under any pressure to come back.

Using its "Onboarder" platform for new joiners, Ogilvy has adapted its content so that everyone at the company knows what is going on and those who are not physically in the building do not feel that their career paths are being affected. Indeed, vice-chairman Rory Sutherland has produced an all-staff film extolling the virtues of continued WFH – something that he thinks improves thought processes and that he has been an advocate of for some time.

For people who are not physically present in the building, simple things such as including them on screensavers are being introduced so that they remain part of the team. Moreover, there are "safe words" to call out behaviour from colleagues that others might feel compromising – for example, breaching social distancing.

Frolich says that it is all about "inclusive and seamless" communication. "One of the largest advantages of having one of the largest behavioural science teams is that they’ve helped us in communications. One of the questions we posed is what’s the office for – we have this fabulous building, but people coming in eight hours a day for five days a week is not how it’s going to be. It’s more about collaboration.

"One of the things that has been interesting has been reaction from creative – and strategy – in that it’s given them more thinking space. I can see that as a real positive that will continue."

Sutherland, who is writing a piece on the future of workplaces for the Adam Smith Institute, thinks that the old, open-plan office configuration – so beloved by agencies – was designed for "averageness" in the first place. A consequence of coronavirus is a chance to take consideration of different people’s needs and requirements when it comes to what they want from work and the autonomy they desire, with space for both reclusion and collaboration.

He thinks the outbreak could actually lead to an increase in productivity, with technology showing that the world can be shrunk and global teams brought closer together without the need for expensive travel – a benefit for network agencies like his.

Offices as collaborative spaces, to be used from time to time and only when necessary: this sounds like a progressive move that the entire industry – and its employees – can benefit from.

Is working from home 'forever' going too far?

Adland in lockdown: 'More resilient, adaptive and caring than you ever thought'