The pressure on wages caused by a talent shortage, a move towards more project-oriented work and high property costs are conspiring to depress profit margins, according to the latest Kingston Smith survey.

The results of this year’s Kingston Smith annual survey were characterised by improved growth – but translating this into increased profit margins was, for many agencies, a struggle. Of the eight sectors surveyed, five saw operating profit margins fall, despite most reporting better growth in fee income.

The marketing services landscape continues to change, with rapidly developing technology presenting opportunities and challenges. The need to make communications interesting and relevant to stand out has never been more important or difficult.

Change, however, generally requires re-evaluation of strategy and continual investment in talent, which makes it expensive. The shortage of talent remains, especially among those with digital expertise, inevitably putting pressure on wages. This cost pressure is exacerbated by the increasing need to use freelancers, who are even more expensive. This, combined with the continued trend away from retainer fees to more project-oriented work and increased property costs, does not make it easy to generate the sort of profit margins that agencies aspire to, and this is reflected in many of the results that we have seen.

In the Kingston Smith survey, we reviewed the financial performance of eight sectors: six individual disciplines – advertising, branding and design, digital, marketing and sales promotion, media buying and PR – as well as the UK quoted and independent marketing services groups (whether individual or mixed discipline). The accounts reviewed are those that were filed at Companies House on or before 30 September 2016 and, in the majority of cases, cover the calendar year to 31 December 2015.

Every sector managed to grow total fee income compared with the results of the previous year. Apart from branding and design and digital, all other sectors reported stronger growth than the year before, which is encouraging.

In contrast to last year, the digital specialists did not report such high fee income growth as one might have expected. It was, in fact, the media buyers and PR consultancies that reported the strongest growth as individual sectors. The top 50 independent agencies were the only group to show average fee income growth in excess of 10%. While some of this was due to acquisitions, a healthy amount was organic.

Across the top 50 independent agencies, spend on staff costs remained extremely high at 62.1% of fee income. However, they were not alone, as this was a key theme across many of the individual disciplines. Six out of the eight sectors surveyed spent more than 60% of their fee income on staff costs, with advertising and branding and design reporting the highest post-recession ratios. When one adds the cost of freelancers to this, the position only looks worse.

Esther Carder is a partner at Kingston Smith 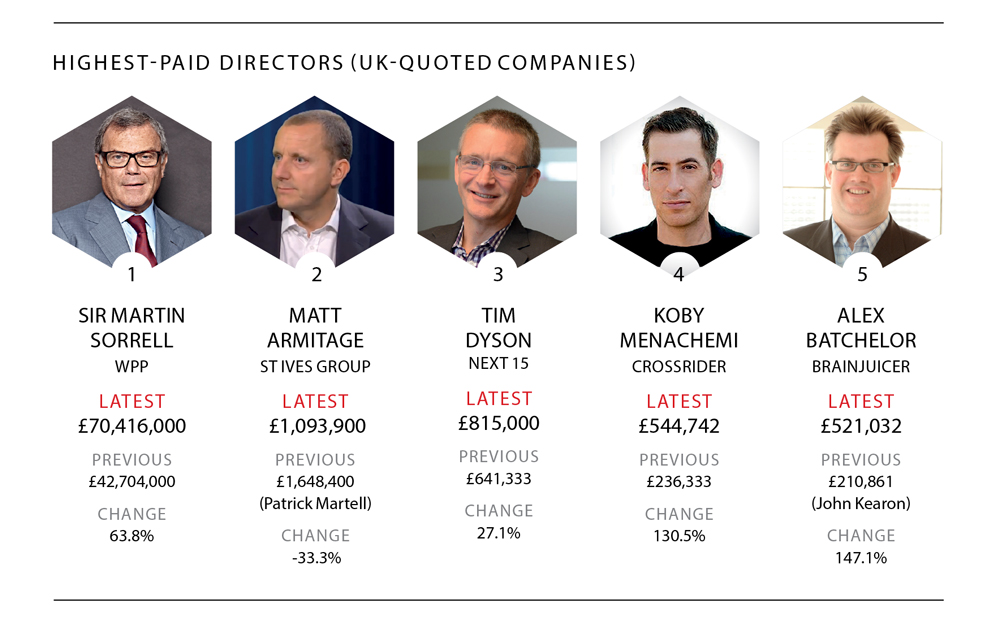 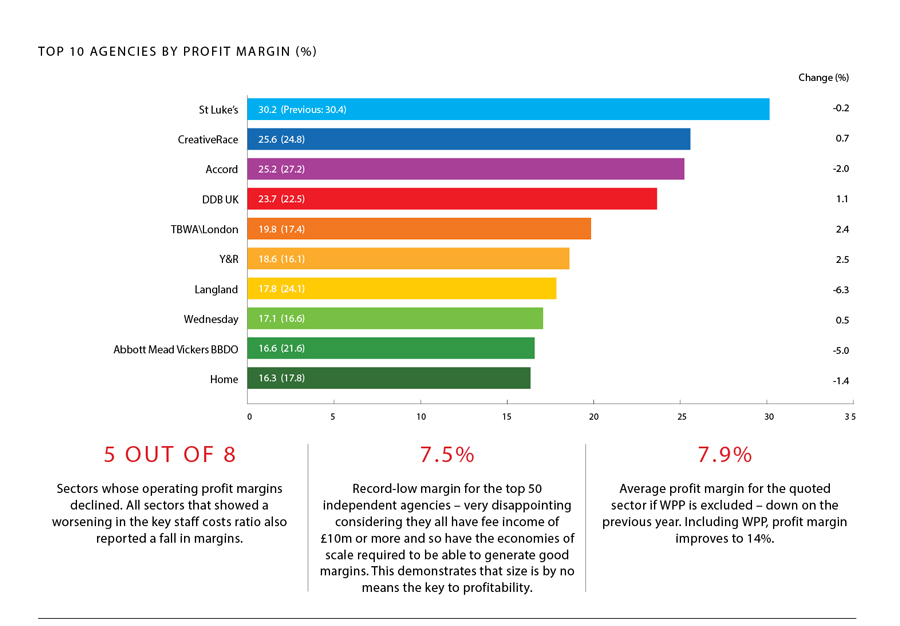 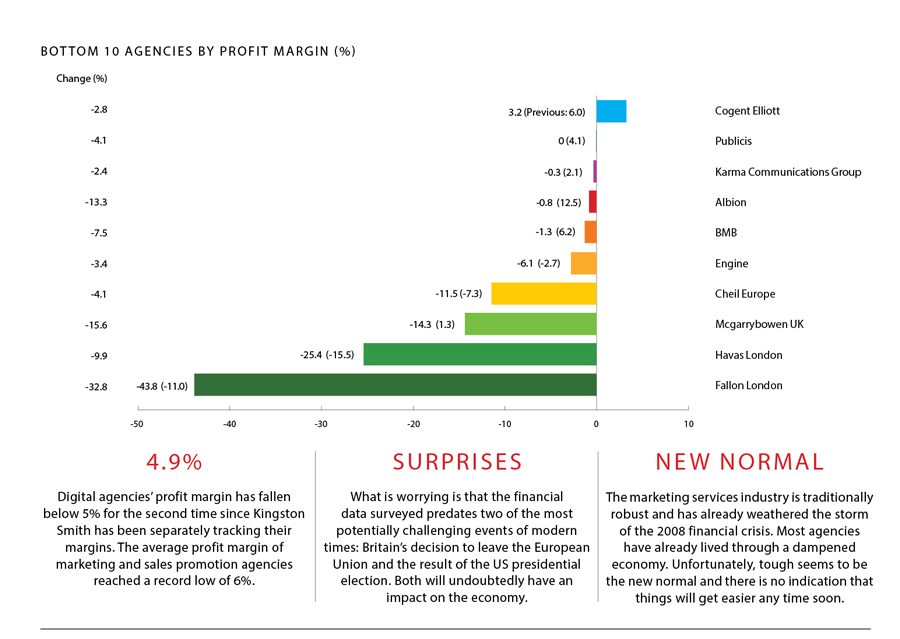 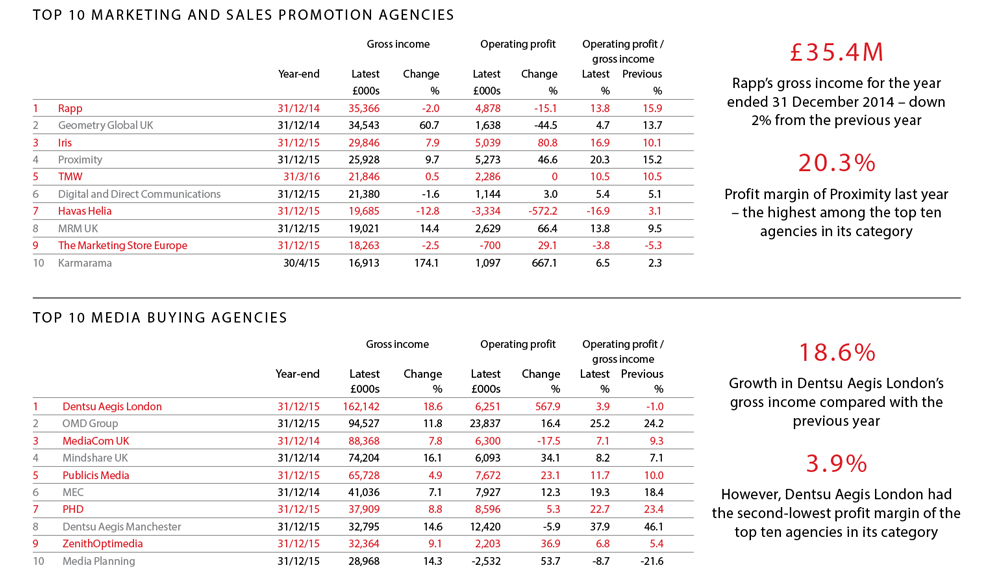 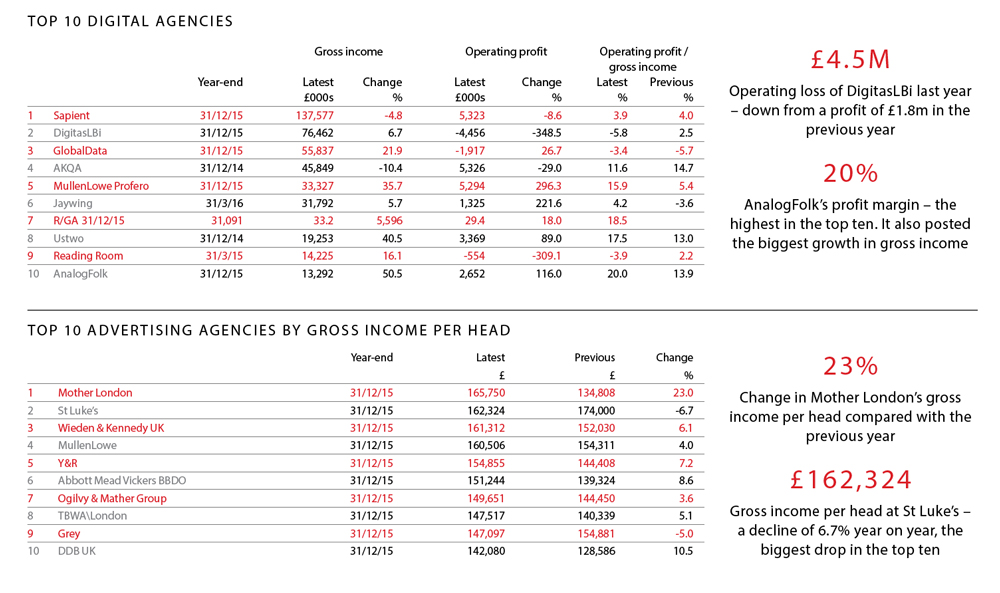 What next for the 45-plus creative?

Is it ever right for brands to play politics?

Another way to strike a blow for independence

A beacon of diversity, Channel 4 must be protected