Celebration of Black futures and wellness were prominent this year.

In the wake of George Floyd’s murder and the Black Lives Matter protests that followed, brands and agencies have made serious pledges to address systemic racism and representation in their organizations, and society at large.

This renewed pledge to be more inclusive was evident during Black History Month, as agencies and brands not only celebrated the Black community’s culture, achievements and wellness, but demonstrated a commitment to allyship beyond the month of February.

Some agencies and brands, for example, teamed up with Black entrepreneurs, such as GoDaddy’s partnership with Moziah Bridges on a Black History Month tie design for his bowtie company. Others chose to tackle deep-rooted stereotypes surrounding Blackness, like Uoma Beauty’s recent ‘Make It Black’ campaign, which attempts to reclaim positivity around the word ‘Black.”

While Black History Month is always a time to call attention to Black culture, this year’s campaigns focused on the possibilities of the future — and some went further than words. Here are a few examples:

“Black Future Makers pays homage to all the leaders and pioneers that have paved the way for black culture, but it also focuses more on today, the now, the new, the next,” said Tish Galindo, founder and CEO at 360. “We flipped [Black History Month] on its head and went with Black Future Makers to give a nod to the past, but look to the future.”

DJ-Nice held a virtual concert on Instagram to kick off the campaign at the beginning of the month, and one Black Future Maker has been honored each day since. AT&T is also hosting a social media contest, in partnership with agency Long Tail, to source more Future Maker nominees by asking users to post a video about why they deserve to be included. Winners will be given $10,000 cash, Dream in Black merchandise and recognition on the 2021 Black Future Makers list.

But the campaign will live on beyond Black History Month, as AT&T continues to honor one Black Future Maker per month for the rest of the year, Galindo said.

The campaign was led by the agency’s internal Black employee resource group, What’s Good?, which polled people about their favorite local restaurants, coffee shops and art galleries. The group created graphics for each and posted once per-day on Instagram, with captions from associates that highlight what they love about the business. 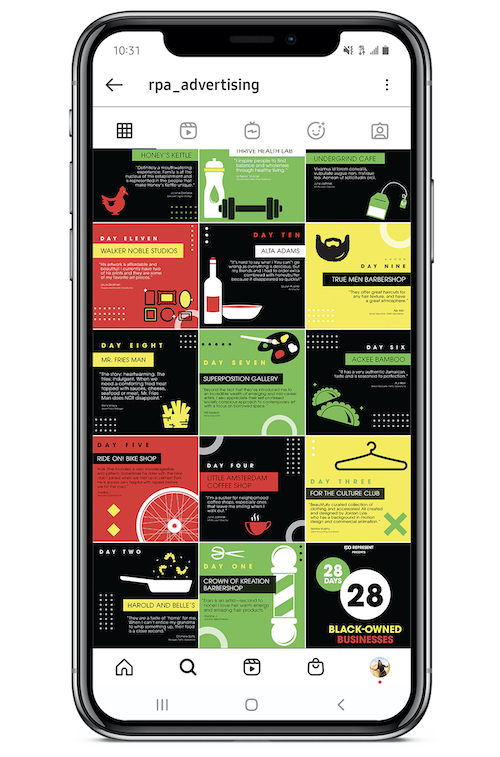 “Black History is American history every day, not just in February,” said Khadijha Jenkins, associate digital producer at RPA. “Uplifting diverse achievements, perspectives and voices within the Black community is our goal and what we strive for beyond this month. This social tribute is an extension of our allegiance to that commitment."

The magazine, inspired by the Green Book, highlights health, self care, culture and wellness and  features Black thought leaders and goods from Black businesses. The digital publication covers topics including exercise, Black queer joy and nature.

The initiative was inspired by the 100th anniversary of the Tulsa massacre, said Pilar McQuirter, cultural strategy director at MullenLowe U.S.

“We combined Black goods with Black wellness brands to create an experience that's calming and makes you feel safe,” she said, adding that the magazine avoids topics around Black trauma or strife.

The initiative is the first Black@MullenLowe campaign to extend across all of parent company IPG.

“It's very important for agencies to continue to invest, and fund spaces for the Black community,” McQuirter said, noting that creative autonomy is key. “It should not require anything else other than whatever [Black employees] want it to be.”

Black employees are encouraged to continue to contribute to the magazine throughout the year to keep the campaign alive beyond Black History Month.

Creative directors Roneka Patterson and Alex Pierce took initiative independently of the Dallas-based ad agency Hawkeye to create Unwritten Rules, a project that illuminates the unspoken rules Black people have to live by to remain safe.

With support from leadership, Patterson and Pierce worked with industry professionals to create a list of social rules in areas such as travel, recreation, education and law enforcement, that dictate Black people’s lives in an online encyclopedia.

Each rule includes a definition and historical context, with references to individuals killed for the act. Some examples include “don’t play with toy guns” and “never leave home without an ID.” Brightly-colored “flash cards” link to resources and petitions to learn more and support Black people and causes. 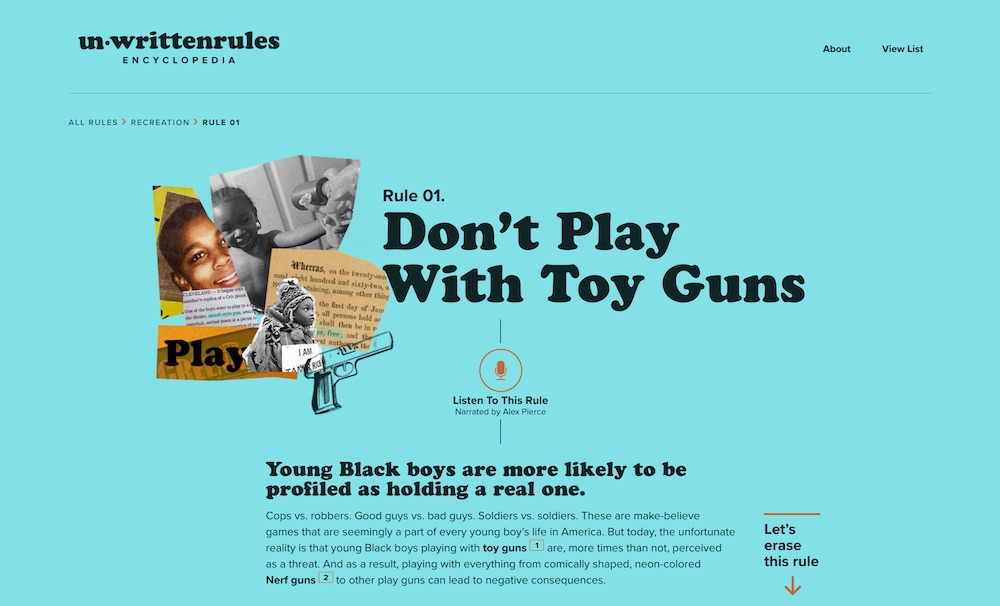 The rules included are based on direct experiences of the project creators, and the platform has begun crowdsourcing anonymous stories from other Black peers to expand the list.

“A lot of non black people struggle with that idea of what privilege means in regards to race,” Pierce said. “We wanted to make sure that it wasn't about what you have as much as what you don't have. Unwritten Rules is about the inverse of privilege.”

The campaign, which will live on throughout the year, extends to Instagram with posts highlighting Black leaders and activists in colorful backsplashes and retro typography.

“We were very intentional with how the color is expressed on the site,” Patterson said. “We saw last year that a lot of people equate Black Americans with the color black. We wanted to push past that.”