Age UK is partnering ITV soap Coronation Street for the latest component of its campaign to tackle loneliness, "No one should have no one to turn to".

Facilitated by Manning Gottlieb OMD, the partnership launches in the first ad break during tonight’s (Wednesday) second episode, which starts at 8.30pm, and continues in episodes on 20 and 23 December. It coincides with a storyline in the show in which veteran character Rita Sullivan, played by 86-year-old Barbara Knox, begins to feel like a burden to the people in her life but is too proud to ask for help.

Age UK was research partner on the plotline. The three ads, created and produced by ITV, feature older people sharing how Rita’s fictional storyline reflects their own experiences, ending with the resolution of how Age UK helped them recover and get their life back on track.

The partnership follows out-of-home ads launched earlier this month, created by Brave, and comes on the back of a survey conducted by YouGov for Age UK that found more than 2.5 million older people feel they have no-one to turn to for help and support. The work raises awareness of Age UK’s advice line, a free, confidential phone service for older people, their families, friends and carers, that is open every day of the year from 8am to 7pm.

Kathi Hall, head of content strategy and brand at Age UK, said: "This is a really exciting collaboration and a brilliant opportunity to raise awareness of the issue of loneliness and isolation at Christmas time.

"We hope that Rita’s story, and the stories of Terence, Gwen and Colin, will get people talking about this important issue and inspire action. We all have a role to play in helping to ensure that no older person feels they are facing the struggles of later life alone." 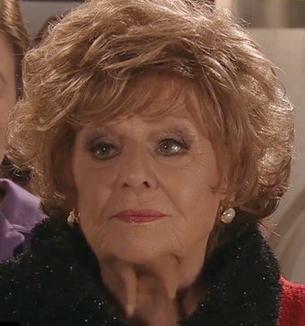 Rita (right) is Coronation Street’s second-longest-running character after Ken Barlow. First appearing in a single episode in 1964, she returned in 1972 and has been a regular ever since.

"ITV are offering us unique, emotive and powerful ways to tell audiences across the nation about the vital work Age UK do through their advice line," Hannah Gardener, client account manager at Manning Gottlieb OMD, said.

"Rita’s story is so powerful because so many people are living through it every day. By delivering bespoke AV executions, we have the opportunity to explain more about the complexity of issues they have to deal with every day and really engage audiences with our message at this vital time of year."

Age UK gets frank about later life in winter spot