For creatives there's a good kind of fear. It can push you to do better, says Adam & Eve/DDB's chief creative officer.

It’s that time of the year again and our little boy is looking longingly up at Mars out of the window of a fake nonedescript middle England semi, hoping one day that he may be reunited with his space bound pet orangutan. Little does he know what his sister has hidden, all badly wrapped in her wardrobe. I take a sip of cold coffee while in the background Adele is practicing her lines to the Chemical Brothers classic Smack my bitch up with a choir of 1000 Scandi children and then it hits me like a sledge hammer to the knads: I’m fucking petrified.

In three months on a cold November morning the annual Christmas shitfest/bonanza (depends who you ask) will roll into town. For those of you that have missed it: a) I don’t believe you exist, b) this is a two-week long period where the great and the good set out their Christmas ad stall.

One of the things that always surprises me the most is how much people actually care and have an opinion about these adverts. The press write about them, people discuss them at work and my mum will tell anyone in the hairdresser's who will listen that her little boy (?!?!?!?) did the one with the penguin and that makes me rigid with fear.

I’m terrified at the thought of how many people will see them, that they will talk about them with glee/disdain, that they will judge with their feet ultimately, but the madness of that is the point of what we do. And I know I’m not the only one who feels this way because the industry spits out some of its best work at this time. Be that the incredible story of THAT football match, Jeff Goldblum being an arse or an Oscar-winning director making a short film worthy of the Everyman about the inventor of the trenchcoat with the chavvy check, there is no denying this time of the year produces the best, bravest, ok the biggest, work.

I know budgets, business models and consumer behaviour have a lot to do with this, but as an industry we try harder, we worry about competitors both client and agency side, and we are all ultimately driven by the fear and the results are wonderful.

Now I know that with the word fear comes all the negative connotations, that of sleepless weeks, hair falling out and ultimately ending up walking down Kilburn High Road in your undies. That’s not the one I’m talking about, but as a side note we do have to be super mindful of that one as an industry. No, I’m talking about the good kind, the kind that makes us better as a business and as creatives the one we thrive off. We most definitely shouldn’t just reserve 80% of it for a two-week period a year, it’s a waste.

Let’s crack it open and spray it all over the place, willy-nilly like we are on a Made in Chelsea boat party. Juniors should be scared of other juniors, be friends but be wary they may be better than you and that’s ok as long as it makes you better than them.

Brands should be scared of other brands, agencies of other agencies, creative directors of other creative directors. Be terrified of people who leave the industry – who knows what the fuck they will do that could be ten times more interesting than the thing you’ve just done and make them a gazzilion more pounds in the process. Be scared of other countries – we had our roast beef arse whipped in Cannes this year by the Kiwis (I know) but I promise you it will make us better. A couple of weeks ago I saw the Absolut kissing spot… you got it… scared…only the other day Mr Kolbusz posted this: 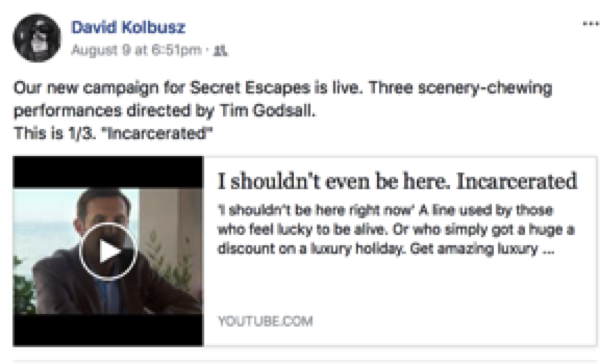 Terrified….. it was good and now I want us to do better. Nike "Sub 2" is brilliant and I’m worried we won’t ever do anything to beat it. Well, we will… or at least we’ll give it a bloody good go.

I love it when marketing directors are scared of each other. That’s when the good stuff happens, risks are taken, budgets are found and uncomfortable new areas explored.

Campaign Big Awards is back with new categories