UK advertising spend will grow by 5% in 2019 to reach £24.74bn, according to the latest Advertising Association/Warc Expenditure Report.

The 5% growth figure is an upward revision of 0.4 percentage points on the estimated growth rate given by the AA/Warc in the last report in July.

While they do not measure the same thing, the new figures paint a rosier picture than the recent IPA Bellwether Report, in which more marketers said their budgets were shrinking rather than growing for the first time in seven years.

The change is largely accounted for by a significant improvement in the projected growth rate in the biggest segment of the market, search advertising. In 2018, this was worth £6.66bn, or 28.3% of all advertising. The latest report forecasts this to grow by 11.6% in 2019, compared with the 9.5% predicted in July – a difference of £140m.

The outlook for the next biggest segment, online display, has also improved, with forecast growth of 13.1%, up from 12.8%. The already impressive growth forecast for video-on-demand, digital out-of-home and cinema have also been revised up to 18.7%, 13.4% and 16.4% respectively.

But while TV was previously forecast to grow by 0.9%, it is now expected to decline by the same percentage. 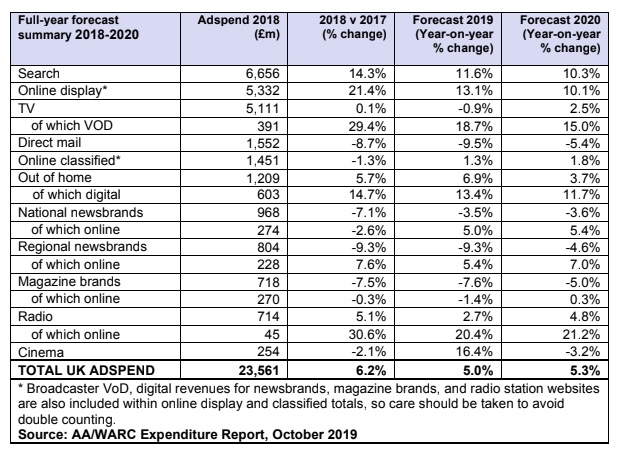 Adspend in the second quarter of 2019 rose 5.8% to £6.0bn, the AA/Warc said, marking the 24th consecutive quarter of growth. Search advertising grew 12.7% in the quarter – 3.3 points higher than forecast – while cinema recorded a massive 49.6% growth, compared with a forecast 5.1%, which AA/Warc said was due to the entrance of a number of new advertisers into cinema advertising.

Stephen Woodford, AA chief executive, said: "These very encouraging adspend figures for Q2 2019 cover the period immediately following the original Brexit date of March 29, demonstrating the continued strength of UK advertising during a time of political uncertainty. Advertising’s dynamism is shown by the growth recorded across many different formats, with particularly impressive performances from cinema, TV VOD and online radio.

"These figures are positive for our industry and are good indicators of the resilience of the UK economy. However, with another scheduled Brexit departure date looking likely to be passed on 31 October, we are acutely conscious of industry’s desire for clarity and need to continue investing for the future during these uncertain times." 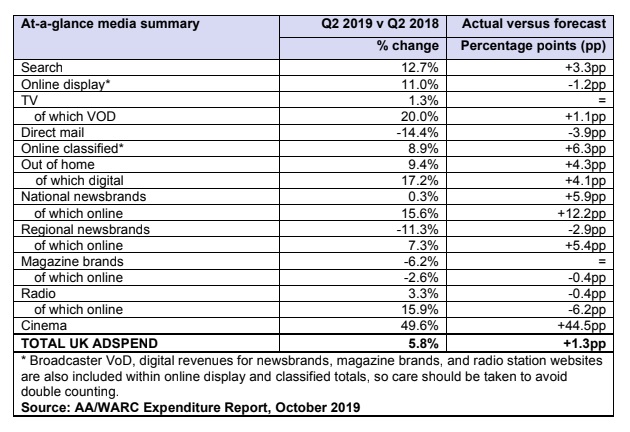 Commenting on the boost for DOOH, Ali MacCallum, chief executive of Kinetic UK, argued that it was "increasingly viewed as a channel through which to deliver against both long-term brand-building and shorter-term sales activation goals.

"As digital OOH campaigns become ever-more integrated with tactical activation in other channels such as mobile and social, the role of the medium is evolving to help solve the challenge brands face in delivering those immediate business outcomes alongside the brand fame at real scale that OOH has always delivered," he said.

2019 adspend growth revised up thanks to star performers

'Relevant' context boosts impact of radio ads by a quarter