Both ads scored high, but one hit home with people shopping for cars, says Ace Metrix's VP of marketing

While we saw a deluge of emotional Mother’s Day ads last week, it was two automakers who took a different approach and climbed the ad performance ladder. Both Ford and Nissan focused on their respective product, but took divergent approaches that resulted in success. With "We Are All Champions" Ford used a dynamic, aspirational approach to launch the 2017 Escape, while in "Safety Today" Nissan gave us a feature-focused ad that delivered a safety message in an informative way.

It’s widely known that the Nissan brand has been in a state of marketing flux recently. In January, newly appointed SVP of Sales & Marketing Christian Meunier was not shy about expressing his opinion that the brand had been suffering from an unclear image for a long time. "Safety Today," created by Zimmerman Advertising, marks the beginning of a Tier 2 dealer campaign that will morph into a national safety campaign in June. Nissan’s goal is to make safety into an exciting story.

Ford, on the other hand, has been advertising four vehicles — the Escape, Edge, Explorer and Expedition — under the "Be Unstoppable" umbrella since last May. The brand has a cohesive strategy, trying to connect to consumers with emotional appeal, as well as highlighting the cutting edge technology of their SUVs. "We Are All Champions," created by recently re-branded Team Detroit (now known as GTB), serves as the launching point of the 2017 Escape and uses the tagline "Life is a sport. We are the utility."

Let’s see how each of these ads worked with consumers to achieve their specific goals. Here at Ace Metrix, we test every nationally airing television ad, as well as most digital video ads, with a panel of 500 respondents who complete standardized surveys that assess the ad both quantitatively and qualitatively. Ads are scored on seven fundamental measures that are most likely to influence consumer behavior including likeability, attention, watchability, information, change, relevance, and desire. These measures combine to give us the Ace Score — a holistic measure of effectiveness ranked on a scale of 1-950. Verbatim viewer responses give additional insight to shape qualitative measures such as emotional sentiment and brand recognition.

While both ads were top performers for the week ending May 6th, Nissan’s Ace Score was slightly higher, 625 vs. 619 for Ford’s ad. These are both impressive scores, coming in at 12% above the norm in the non-luxury automotive category. Both ads also delivered scores above norm for all seven fundamental measures, had high brand recognition and were low on the polarization scale.

Where Ford’s exciting, fast-paced ad breaks away from Nissan’s is in effectiveness among auto intenders. Viewers of the ads who are looking to purchase or lease a new vehicle within 12 months gave Ford’s "We Are All Champions" an Ace Score of 719. These same intenders gave Nissan’s "Safety First" a score of 666.

The different styles of the two ads is represented visually in their Ad Personalities below, which illustrate the relative strength of each measures we use to understand how an ad achieves specific objectives. Nissan’s ad is powered by Information and Change, along with presenting a message viewers find Relevant. A high Change score indicates that consumers’ sense a shift in brand direction, which could be a good thing for Nissan if it was suffering from a brand identity crisis.

Ford delivers a spot driven by Desire and Relevance, a powerful combination for an automotive brand with an intended call-to-action of visiting the website and searching for a car. Likeability and Change also drives the ad, another positive for Ford. 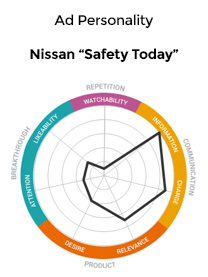 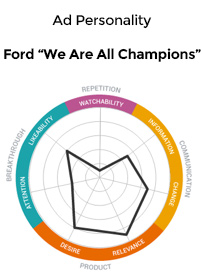 These viewer quotes from auto intenders also illustrate how each ad is successful in its own way:

By engaging consumers in distinct ways, Nissan and Ford show us that effective ads can take different paths. Nissan gave consumers an informative ad that is shifting brand perception. Ford entertained with an action-packed ad that consumers could relate to. Both delivered on specific objectives, and for that, each brand and their respective agencies should be commended.