Forecast growth of 6.3% this year attributed to the strongest first half since 2014.

The UK ad market is set to grow 6.3% across this year after it enjoyed its strongest first half since 2014, the latest Advertising Association/Warc Expenditure Report shows.

Across the first six months of the year, growth was 7.2%. Spend in the second quarter – also the strongest in four years – was up 6.4%.

In the previous report three months ago, growth in the first quarter was estimated to be 5.9%.

This positive trajectory means the AA/Warc have upgraded their forecast for 2018 significantly to 6.3%, from the previous figure of 4.8%. Total expenditure in 2018 is now expected to be £23.53bn. 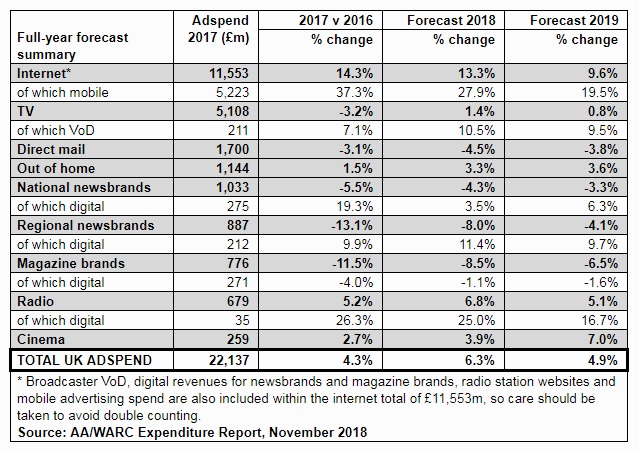 The revised forecasts have been driven by booming internet adspend, which is now forecast to grow 13.3% this year – adjusted from 9.8% in the previous report.

But despite growing digital adspend for national and regional news brands and magazine brands, both sectors suffered an overall spending decline as print spending continued to plunge. 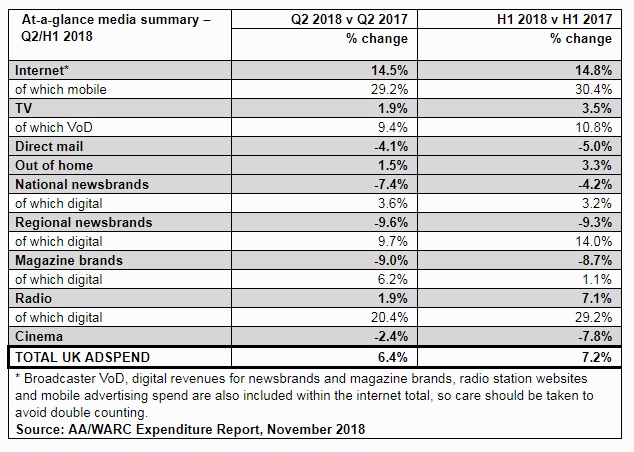 Cinema adspend fell year on year in both the first half and second quarter, but it is forecast to rebound and record full-year growth of 3.9%.

Stephen Woodford, chief executive at the AA, said that realising the positive future predicted in the figures depended on getting a good outcome from Brexit negotiations.

"Spend on advertising is showing real strength and resilience especially at a time of some uncertainty for UK business," he said.

"We must ensure that the unique features that have made the UK the global hub for our industry, such as access to the best and brightest creative talent from across the world, are prioritised as we leave the EU."

Hugo Drayton, chief executive of Inskin Media, warned that the picture for advertising was not uniformly positive.

"While the TV headlines are buoyant, the underlying TV advertising trends are less euphoric, as evidenced by ITV’s stock-market warning this week," he said.

"The uncertain socio-political and economic environment - especially around Brexit - means that, despite the continued growth, and very strong numbers for H1 2018, the market is not expecting H2 – and especially Q4 – to perform as strongly, compared to 2017. The hugely impressive overall 7.2% growth in H1 2018 is unlikely to be repeated in the bigger, more critical H2 2018, especially in light of the very squeezed retail sector."

Brands 'missing out on £3bn profit' by ignoring newsbrands