The profession is trusted by just 16% of people in the UK, a similar level to politicians.

Trust in advertising executives has increased but the profession is still regarded as the least likely to tell the truth, new research from Ipsos Mori has shown.

A total of 16% of people said they would “generally trust” ad professionals to be truthful in the research firm’s latest Veracity Index 2021.

The figure is slightly higher than the 13% of people who said they trusted ad executives last year, when the profession also came bottom of the pack.

A total of 29 job roles plus the “ordinary man/woman in the street” – trusted by 60% of people – were compared for the index, using survey answers from 1007 British adults in November.

Other professions deemed among the least trustworthy this year are politicians in general (19%), government ministers (19%), journalists (28%) and business leaders (33%).

As with ad executives, faith in government ministers has risen this year – both increased by three percentage points.

The biggest drop this year was among the police, which declined by eight percentage points, to 63% of the general public believing they tell the truth, marking a second consecutive year of declining scores.

Mike Clemence, researcher at Ipsos Mori, said: “This year’s index has a new entrant very near the top of the ranking: more than nine in 10 Britons say they trust librarians to tell the truth. It also confirms some movements we started to see last year, most notably the drop in trust in the police, which can be seen among both men and women.

“We have also seen a small increase in trust in politicians – although both are trusted by just one in five Britons. This leaves advertising executives at the foot of the table for 2021, although, even with them, distrust is not as bad as it was last year.”

Advertising leaders pointed out that trust in ads was far higher, noting that it is advertising executives who are behind those ads.

Stephen Woodford, chief executive of the Advertising Association, said: “While on face value these results might look disappointing to someone who works in advertising, we would suggest that this question is rather loaded against the profession.

"For example, if you asked the same respondents whether they trusted an ad, made by an advertising professional, you would get a higher positive response and we have seen public trust in advertising increasing year-on-year."

He added; "The industry has a clear action plan to continue to improve on these levels, with a big focus on the increased promotion of the ASA in 2022 as well as delivering on plans to make work that is more inclusive and supportive of more sustainable ways of living.” 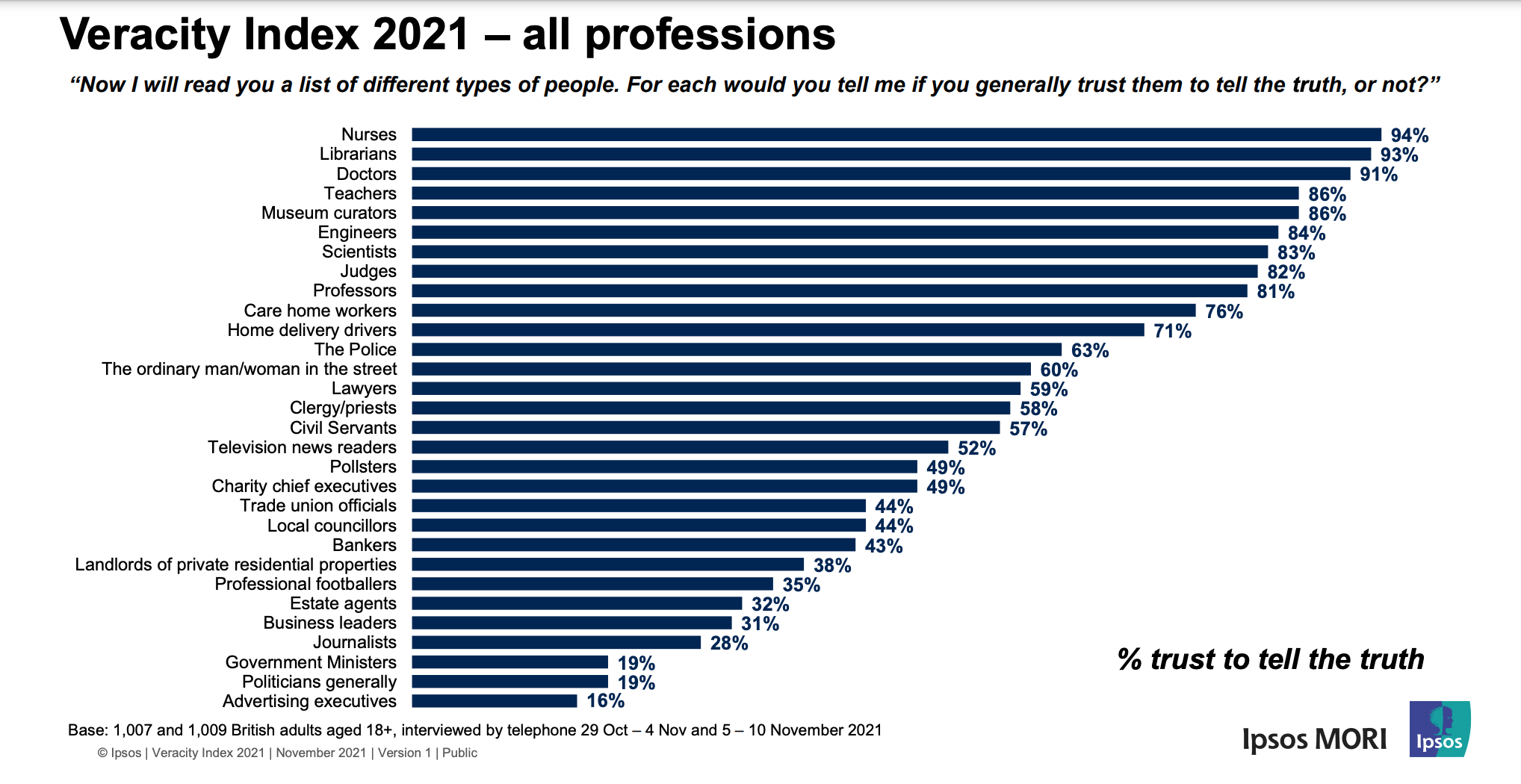 Earlier this year, research from the AA found attitudes towards the UK advertising sector as a whole have improved, but that the industry still “has a clear public trust problem”.

How do you solve a problem like adland's trust issue? Here are some answers

Don’t sit on the sidelines: Five ways ad industry can lead on sustainability after COP26