The organization partnered with Campaign US to stream the ANDY awards judging process live last week.

The Advertising Club has revealed the winners of the 57th annual ANDY Awards, its flagship creative awards program that marks the beginning of the creative awards season.

Translation won the GRANDY Award, the program’s highest honor, for the first time for ‘You love Me,’ a campaign for Beats by Dre.

Mastercard won the Bravery award for its True Name initiative, which allowed transgender people ot use their chosen name on their credit cards in partnership with Citi Bank. And McCann Health won the social good award for a campaign where it used deepfake technology to recreate a victim of the Parkland shootings to raise awareness about gun violence.

IPG had the strongest showing of all the holding companies at this year’s awards, closely followed by collective wins by independent agencies including Mischief @ No Fixed Address, which won for its ‘Dictators’ campaign, and  We Believers, which won for ‘BK Cow’s Menu,’ a global campaign for Burger King.

By region, the top scoring work was: ‘Suberb Owl’ by R/GA in North America; ‘Half Fans’ by Leo Burnett in South America; #WombStories by AMV BBDO in Europe; and ‘The Massacre of Kingdom’ by Wieden + Kennedy Tokyo in Asia.

This year’s awards were chaired by PJ Pereira, creative chairman at Pereira O’Dell, who will serve in the position for two years. Pereira has served on the ANDY’s jury in the past and as Cannes Lions jury president three times.

“In a year that was extremely competitive and filled with its share of difficulties, we saw the work feel more honest and authentic than ever before – leading to deeply felt messages and gratitude,” Pereira said in a statement.

This year’s awards program included the launch of Face the Future, an Ad Club initiative that aims to foster more diverse creative leadership. As part of the program, The ANDY’s incorporated a mentorship program into the judging process that paired the 31 senior creative judges with diverse and underrepresented recent college graduates, and added five mid-career and diverse judges to the panel.

This year’s winning work “reigned supreme with diversity and influential messages,” Pereria said, adding that awards were given to a Trans person, a Black creative and a Hispanic family that created a gun violence campaign after the death of their son.

On April 1, Campaign US partnered with the ANDY to live stream the judging process, which the program does annually to make the important and culturally relevant discussions that happen in the judging room transparent to the industry. Watch the replay here. 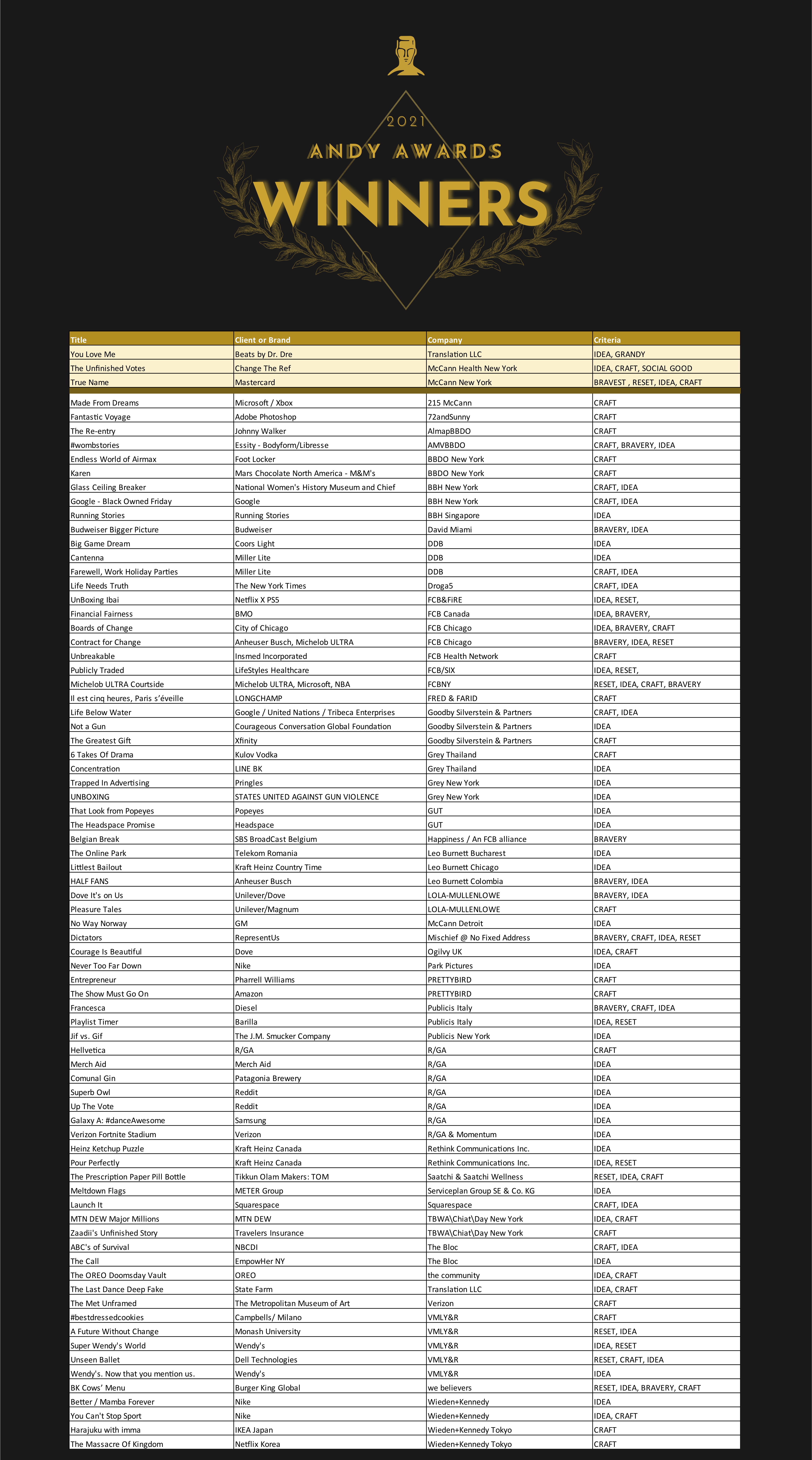