The industry talks big about its drive for diversity -- there's no reason why this shouldn't encompass education.

A vast swathe of agencies still require entry-level talent to have a college degree, research by Campaign US has revealed.

Ogilvy, FCB, POSSIBLE, Wieden+Kennedy, GroupM and the ANA are among the companies currently advertising roles in and outside the creative field which include wording related to the need or desire for university education.

It comes at a time when the industry continues to talk big about its drive for diversity and on the backdrop of a U.S. Census Bureau survey that found only 33 percent of Americans aged 25 and over hold a bachelor’s degree or higher.

"If agencies and clients only employ new recruits from this pool of people they are immediately cutting off the 67 percent of adults that do not have a degree -- that’s a pretty severe pre selection for any job," said Daniel Jeffries of Jeffries Consulting.

The Boston-based industry vet, who entered adland years ago after serving with the British Armed Forces and is not university educated, stressed the impact of this means the sector is in danger of creating clones and ultimately only targeting a specific audience that it truly understands.

He explained: "If all agency staff have a degree, that means that they were able to afford to go to school -- they may have racked up some debt on the way but they were able to borrow that money in in the first place -- and that means we have created a wedge between rich and poor as a result of educated versus less educated."

Picture the deep-rooted effect this has on adland: clients need their advertising to appeal to a broad range of individuals in the target audience, said Jeffries. Developing empathy and understanding with that audience is difficult at the best of times. "Add to that the likelihood of many agency staffers struggling to grasp what it’s like to live a life of poverty where higher education is a far off dream -- it’s no wonder brands routinely fail to reach audiences with authentic messages."

Jeffries added: "Advertising is better than many industries at tackling the impact of generations of non-diverse hiring practices and it has the opportunity to do something on this to continue to lead.

"It would be great to see agencies take a more deliberate approach to hiring people with a less traditional educational resume and offering them education on the job in how to become great ad folk. The outcome of this would be a much fairer society and an industry that truly represents the audience it is tasked with talking to -- clients would feel better represented and the advertising might actually be more effective as a bonus."

Some agency job listings are sculpted by the clients

A creative assistant role with Wieden+Kennedy live on Google’s Hire portal (with responsibilities which include making "travel arrangements and hotel and restaurant reservations for CDs") outlines "bachelor’s degree preferred" as well as "creative background preferred."

This, however, is not reflective of all job applications at FCB, said spokesperson who explained that client needs help shape the role requirements and stressed the agency’s work in recruiting diverse talent through programs which promote those without college degrees.

The spokesperson explained: "As is stated in all our job postings, FCB takes pride in being an equal opportunity employer. Some jobs and some client needs require specific job qualifications like a college degree, which may have been the case with this posting. However, most of our job postings include the language ‘or other relevant experience.’

"Additionally, we target our recruitment for those who are socially and economically disadvantaged and without a college degree, but have other supplemental training that will bridge the gap for work readiness through organizations like Year-Up. Year Up is an incredible program for young people who do not follow the traditional college path that we are proud to hire from."

An associate, paid social job with WPP’s GroupM says there is no prior experience needed for the entry-level role, and goes on to state the desire for "an academic degree in a related field (such as Advertising, Marketing, Economics, Applied Math, Economics, Mathematics, Analytics, or Communications)."

The media powerhouse spoke of its intent to remove degree requirements from listings when approached by Campaign US.

A spokesperson for GroupM said: "For all our entry level positions, we already consider and hire people without traditional four-year degrees, and we are planning to remove college degree requirements from the job postings.

"We’re training hiring managers on what to look for beyond a college degree when evaluating candidates, and we’re talking with clients to share new expectations about the people on their teams as the workforce evolves.

"Supporting this, for recruits without a four-year degree, we’re piloting a robust training program with Columbia and Trilogy Education focused on media planning and implementation on digital platforms. Our first class will have gender balance and greater than 50 percent people of color. Additionally, we reimburse college tuition up to $5,000 annually for employees pursuing a first bachelor’s degree. GroupM’s Diversity, Equity & Inclusion Board is working to evolve our business so we better reflect the communities we serve."

Paul Marobella, chairman and CEO at Havas Creative NA, said: "A college degree is an excellent proxy in demonstrating someone’s commitment, dedication and resilience towards a goal. With creativity, however, a degree is not typically an indicator of someone’s passion and pursuit of culture, what’s modern and current, and how to capture that power to connect emotionally with a consumer."

Even the ANA asks for a college degree for its entry-level junior graphic designer role.

When probed, an ANA spokesperson doubled-down, explaining that in the organization’s experience it’s "found that the demands of this particular assignment require a level of training and experience usually associated with candidates who have earned college degrees."

A statement added: "That said, we would certainly be open to considering job candidates without degrees for all of our available positions, provided their work experience and, in this case, their design portfolios, meet the requirements of the job." 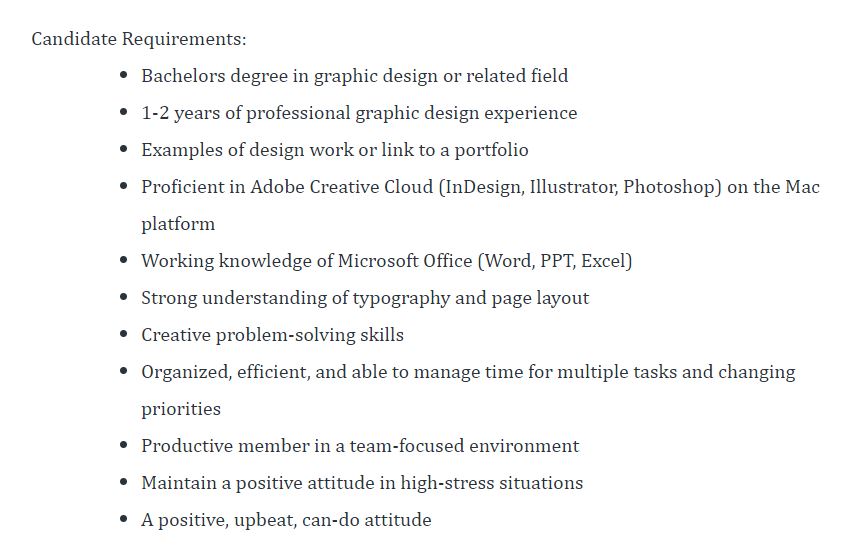 In some cases, immigration has a role to play in suppressing the industry’s goal to become more educationally diverse.

A person with direct knowledge of a recent hire at a well-known independent creative agency said often those joining on a visa from abroad are viewed more favorably by the government if they’re bringing high education into the U.S.

A college degree -- or proof that someone entering the U.S. for work has experience and education unlike their American counterpart -- is something applicants spend hours crafting on many of the most common work visa applications.

Meanwhile, numerous agencies which are not mired in tradition have already scrapped the requirement.

Jason Peterson, who runs The Times in Chicago, just hired someone without looking at their educational background because the person created a campaign for himself and rallied his followers on Instagram to tag and message the founder in more than 2,000 posts to hire him.

He explained: "College degrees and diplomas have absolutely nothing to do with a job in creative advertising. Studying a broken and out of date industry in school is actually miseducation.

"When I speak at schools I always see the students have a better understanding and sense of direction our industry needs versus the professors teaching them.

"The Times recruits young talent in general, some of them happen to be college students, we have never looked at a GPA or diploma -- we hire the hustlers with the ability to make. The school of social media is much more valuable than a university."

What does the 4A’s think?

The industry’s governing body is working with its agency partners to better this area of diversity.

Marla Kaplowitz, president and CEO at the 4A’s, told Campaign US: "Most entry level jobs in agencies require skills training and learning on the job. As agencies continue to compete for talent and want to ensure a diverse and inclusive workforce, there’s an opportunity to move beyond the previously strict four-year college degree requirement."

The company’s EVP, Talent and Inclusion, Simon Fenwick, has long been a huge proponent of dropping the four-year college requirement.

A few years ago, he played a key role in encouraging IPG Mediabrands to reassess its degree requirement for some roles and accept students with associate qualifications. But he wants the industry to go a step further in a country that falls behind the global average of professional apprenticeship offers.

He said: "There are many roles within agencies that simply do not require college degrees. The market is changing and the talent pool is contracting. There is an opportunity for the advertising industry to be at the front end of driving a more inclusive and diverse workplace.

"All that needs to happen is that agencies need to look at the amazing diverse talent who are overlooked simply because they cannot afford the financial strain that comes with education in the US. By investing in training and mentorship, by being courageous and taking a chance they can change the lives of those forgotten and in turn drive a more inclusive society." 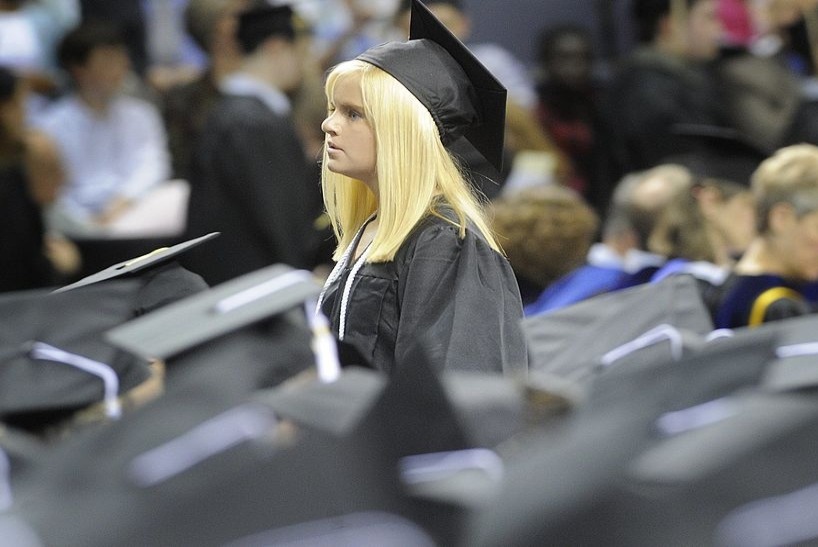 What do the recruiters think?

"Considering only 33 percent of the U.S. has earned a four-year degree, there are a lot of smart people who may be getting overlooked because they wanted to work straight out of high school or couldn’t afford the cost of college tuition.

"Advertising is all about inventiveness, entrepreneurship, hustle, and hard work. Grit and determination is more relevant than a pedigree.

"If you have a role that requires a degree of specialty, or if you believe that candidates without college degrees lack skills, then consider investing in programs that allow for more work-based learning opportunities on the job. It’s another way to help even the playing field and give hungry and ambitious talent a chance they might never get."

45 flat whites: How to break into advertising

Who's got your back? Agencies.