LONDON - Actresses Kate Beckinsale and Zooey Deschanel have dressed up to represent cocktails such as the Bloody Mary in a series of press ads for Absolut Vodka.

The series features the two actresses representing a different Absolut cocktail "experience" with the tagline 'Every Drink Is An Exceptional Experience'.

The campaign was created by TBWA\Chiat\Day and features photography by Ellen von Unwerth with instructions on how to mix cocktails using their spirits.

The bottom of each of the posters include the straplines "A vision by..." followed by the actress' name, "and Ellen von Unwerth" with a prompt to visit Absolut's website.

Mark Hamilton, head of marketing for vodka at Pernod Ricard UK, said: "We believe that doing things differently leads to something exceptional and the 'Drinks' campaign is a great example of this.

The video, produced by MJZ, the film imagines a world inhabited by both humans and robots, focusing on the central character of a lonely robot called Sheldon. 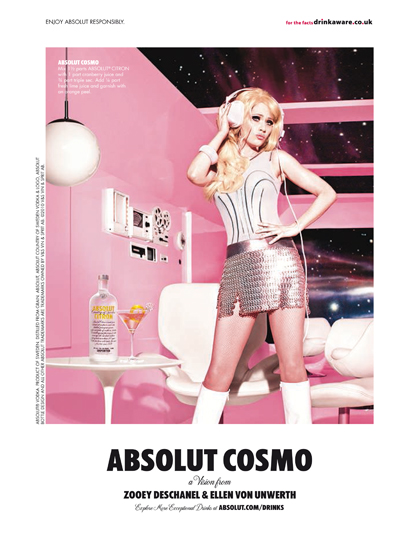 Pernod-Ricard shifts global Kahlua account out of Publicis into TBWA