"I would not be surprised if some major media agency groups got together and agreed to reject this brief."

Anheuser-Busch InBev, the world's largest beer brewer, will soon put its global media business in review, according to a document obtained by Campaign US.

The brief, which was sent to consultants pitching to manage the RFP, states that AB InBev is going through a "transformational journey within marketing with media and our relationship with agencies at the center."

"We are seeking to confirm an optimal 2021+ media structure & agency roster that will be able to deliver: best-in-class capabilities and martech integration, strategic and operational excellence and strong commercial value," the RFP for Global Strategic Media Advisor document states. The global media assignment contracts are expected to be signed by September 2020, the brief reads.

The document states that ABI currently invests more than $1 billion in media across more than 50 markets. It adds that "despite knowing the unstoppable trends in digital disruption/ fragmentation/adoption and linear TV cord-cutting," the company is largely a TV mass-marketer, investing 70 percent in traditional and 30 percent in digital globally. (See small clipping of document below). 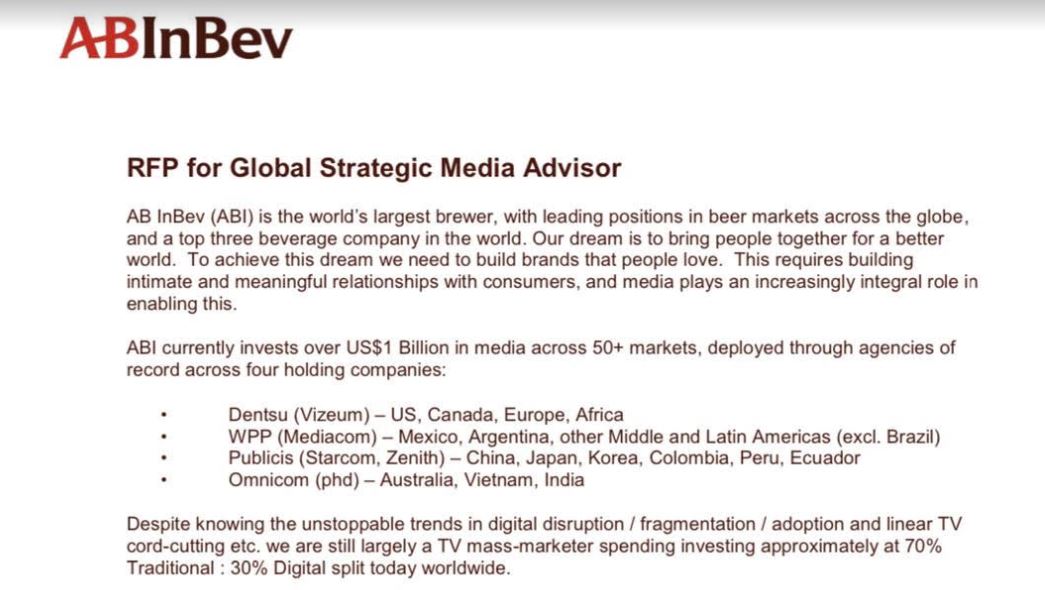 People familiar with the upcoming review say it's a global media consolidation play.

It was not immediately clear which consultancy is running the upcoming media review.

"The pitch will require agencies to guarantee future media buying guarantees by participating in an online reverse auction, which makes agencies undercut each other to unrealistic prices," according to a consultant familiar with the brief.

In these situations, agencies watch online as their competitors bid lower and lower to win the business.

The consultant added: "I would not be surprised if some major media agency groups got together and agreed to reject this brief. They need to stand up to unfair terms of business."

AB InBev may push payment terms from 120 days to 150 for their media agencies, according to that consultant.

An agency executive who has worked with ABI said that the brewer "fails to recognize that marketing requires partnership and you can't cut to the bone and pay late. Well, you can, but don't expect anyone's best."

The executive added: "The relationship between cost-cutting and brand growth is direct and ABI continues to prove that out. Brands decline at about the same rate as cost-cutting rises."

A person familiar with ABI and the brief told Campaign US that "everyone knows that an ABI media pitch is usually about reducing costs."

"Only two years ago they put media agencies under huge pressure to cut fees and media prices and some of them won’t be happy to go through that again so soon for very little upside. They are one of a handful of advertisers that still views media as a commodity, their agencies like a bank and push their suppliers to accept punishing payment terms," this person said.

They added that ABI is "the agency CFOs’ nightmare."

In a statement to Campaign US on Friday night, AB InBev emailed: "We do not have an open media review. Moreover, we do not comment on false or misleading speculation about our RFPs or their commercial terms."

The company said it would explain the "false or misleading speculation" next week.

Several years ago, ABI defended itself when accused of demanding burdensome payment terms from small U.K. suppliers. At the time, the company said in a statement: "Like many other global companies, we review our payment terms and conditions regularly in accordance with good commercial practices and applicable law.

"Payment terms are always set as part of commercial negotiations and established in mutual agreement. Elements that influence the payment terms include price, quality, size of the supplier, type of product/service and volume."

In 2015, the Marketing Agencies Association in London told its ad agencies to go on "strike" against ABI due to payment periods of longer than 120 days and requests for pro bono work.

The brewing giant also works with WPP’s Mediacom in Mexico, Argentina and other Middle and Latin Americas (excluding Brazil); Publicis’ Starcom and Zenith, China, Japan, Korea, Colombia, Peru and Ecuador; and Omnicom’s phd in Austria, Vietnam and India, according to the Strategic Media Advisor brief.

What advertising can learn from Dharavi