The Advertising Association and Warc have turned much more bullish on the growth prospects for adspend around broadcaster video-on-demand.

In their latest forecast of the extent of growth in the advertising market, issued today, the AA and Warc said BVOD expenditure was likely to rise by 26.3% in 2019 and admitted this part of the market was much bigger than it previously thought.

Warc Data managing editor James McDonald told Campaign that the revision was made after consultations with industry stakeholders, who "felt we had overstated spot and understated VOD in recent quarters". 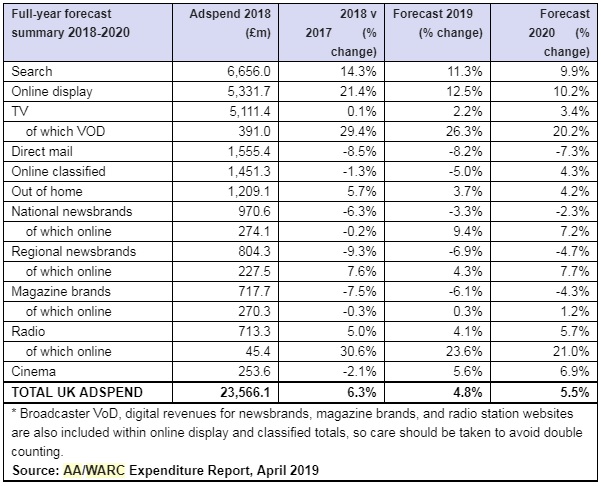 The previous forecast of 9.5% growth for BVOD in 2019 has been revised up significantly to 26.3%. If the reality lives up to the expectation, it would take this year’s spend to just under £500m and account for close to a tenth of the forecast £5.22bn overall adspend on TV.

The revision has also led the AA and Warc to become more optimistic on growth prospects for overall TV advertising this year, changing its forecast from 0.8% to 2.2%.

Matt Hill, research and strategy director at commercial TV marketing body Thinkbox, said: "As TV viewing redistributes between linear and on demand, BVOD is now an essential and established part of the TV advertising landscape. The AA/Warc’s confidence in its continued rapid growth over the next two years reflects this."

However, the upgrade did not extend to the whole market, with the AA and Warc trimming its 2019 growth forecast from 4.9% to 4.8%.

The bulk of the growth is predicted to come from internet advertising, which is now divided into search, display and classified categories, in a change from the previous methodology of simply categorising it all as "internet" and, within that, "mobile".

There was a major downward revision to spending on direct mail, which is expected to shrink the most of any category this year, at 8.2% rather than the previously forecast 4.5%.

Out-of-home, regional news brands, radio and cinema were also revised down, but to lesser extents.

Further forward, the AA and Warc expect ad expenditure growth to accelerate in 2020 to 5.5%, delivering an 11th consecutive year of expansion.

Avengers: Endgame is a watershed moment for cinema

GDPR fails to stop brands' rush to programmatic in Europe

UK adspend forecast to slow to 4.6% - and bad Brexit could make things worse