Whether promoting products or world peace, these campaigns tried to give us all a break from the chaos outside.

2017 was most certainly A Year, but that didn’t stop anyone from jumping on the holiday bandwagon and releasing the expected slate of uplifting spots. Some took a humorous tack; others focused on classic themes of family togetherness and a few made (less-than-explicit) dives into politics with campaigns urging unity and love. As we look to next year and hope it’ll be better than this last one, here are seven ways brands got into the holiday spirit.

Think you can make a holiday ham better than Honey Baked? In this spot, ambitious home cook Kelly gives it a shot, and it doesn’t turn out well: honey pooled on the countertop, smoke alarm blaring, charred exterior. There’s even a chainsaw at one point. Hopefully Kelly had time to order something else before her party.

Wall of Love for Teleflora by the Wonderful Company

Trump hasn’t yet followed through on his promise of a border wall, but he’s on his way. To combat that divisive wall, Teleflora built its own within view of the Capitol: a grid of free bouquets. They called it the "Wall of Love," and as they say, it’s meant to be torn down.

3D Holiday for Microsoft by m:united//McCann

Microsoft’s animated holiday campaign follows a young woman as she uses her Surface to create an intergalactic winter wonderland. Just as Teleflora’s spot is very clearly about politics but doesn’t mention them, the copy for this one reads, "When we are inclusive and celebrate our differences we can make the world a better place."

In this SFW spot, a Jewish couple’s menorah lighting triggers a massive light show at a house across the street, complete with a metal version of "Hava Nagila." The campaign promoted Pornub’s Premium service, an on-demand, HD version of the amateur site. It’s the latest collaboration with Madrid’s Officer & Gentleman, which specializes in SFW campaigns for NSFW brands.

Holiday Hintlist for Verizon by R/GA 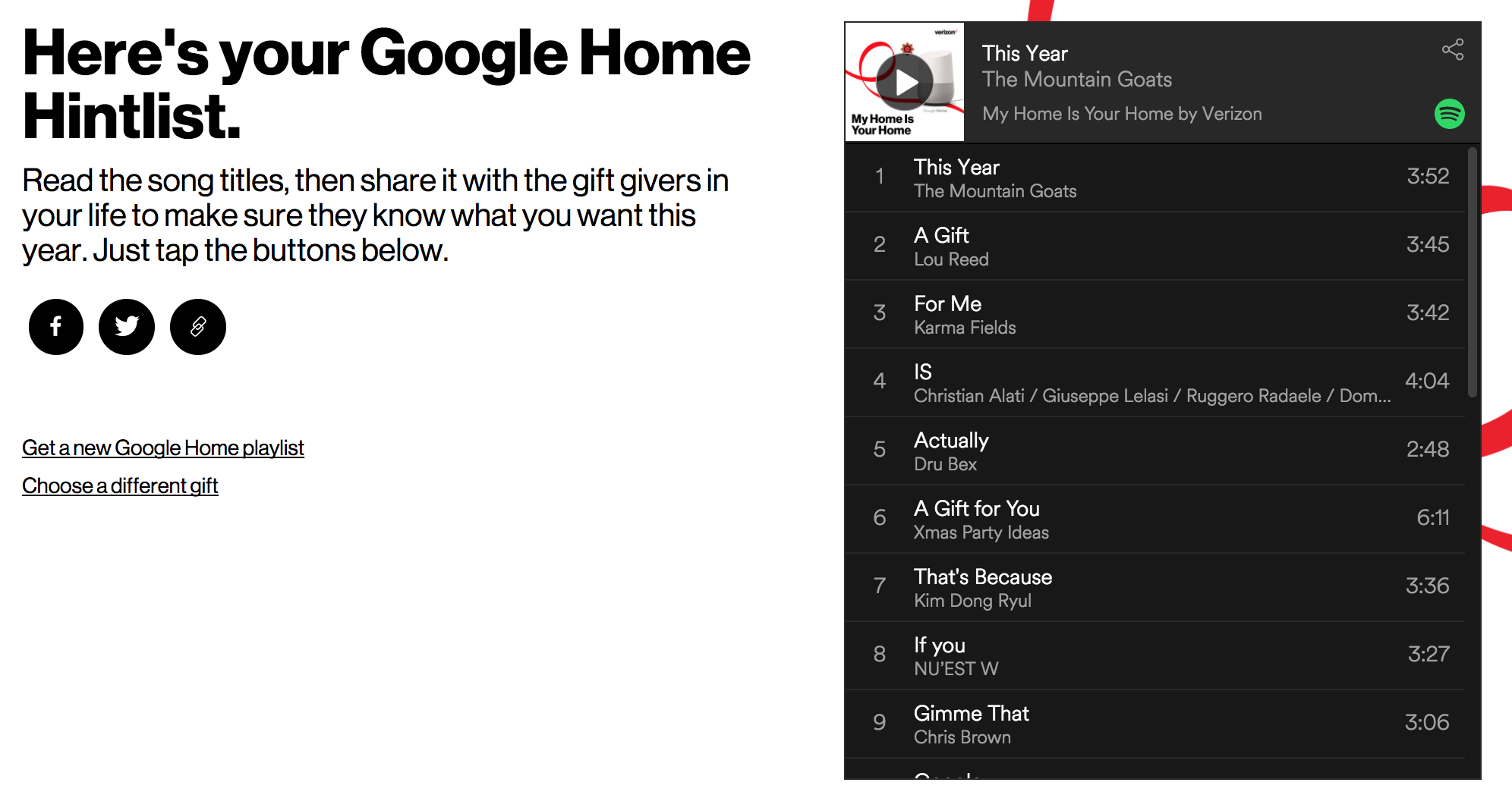 Pick a Verizon product you’d like to see under your tree/menorah/nondenominational centerpiece decoration, and an algorithm gets you a playlist whose track titles spell out a plea for that gift. This campaign is a coup for Spotify artists with weird song names—Supermarket’s "S8" is the only way to hint at a Galaxy, and Devin Townsend Project’s got the lock on "Z2."

Who’s Your Daddy for Home Paternity by Humanaut

In the DIY testing company’s first-ever campaign, the Christmas story gets a modern update, whisking Mary and Joseph to a Maury-style daytime show. Despite being cheeky, it’s a very accurate retelling of the story, albeit one concocted for maximum attention. As Humanaut CEO David Littlejohn told Campaign, "Knowing so many brands are trying to make sweet, earnest holiday videos, we just knew this was the opportunity to do something very different."

A Very Sonos Holiday for Sonos by Cornerstone

Directed by Jason Koenig, who’s helmed videos for Ed Sheeran and and Macklemore & Ryan Lewis, this long-form spot stars an ensemble of talented, multidisciplinary dancers compelled to boogie by the household’s Sonos. Come for the impressive pop and lockers, stay for the adorably voguing child.

A little over a year ago, partner airlines Virgin Atlantic and Delta moved in together at Heathrow. This holiday season, they released their first joint campaign, which follows estranged brothers through a reunion thanks to smooth flights and a fantastical story about scarves and a yak.

Six spots from advertisers who didn't forget that Thanksgiving exists