There are only 27 days from Thanksgiving and Christmas Day this year. Last year, shoppers had 32 days to complete their lists.

As the official holiday shopping season begins on Black Friday, the experts have already spoken about what it will all mean come the end of December.

One thing is absolute: Procrastinators will have a problem.

There are only 27 days from Thanksgiving and Christmas Day this year. Last year, shoppers had 32 days to complete their lists.

With time in short supply, another commodity will be flourishing. Consumers will spend a whopping 75 percent more in 2019 than they did last year, with an average holiday budget of $1,649. Credit card monitoring giant Experian made this prediction, and also forecasts additional stress to go along with all that money (see below).

In the days before Thanksgiving, Campaign US reached out to marketing experts and filtered through a bounty of research to capture the mood of the shopping season.

There will be plenty of stress and a little less thoughtfulness, predicts Experian.

According to this year’s Experian holiday survey of 1,159 consumers, 38 percent said they felt stressed when they thought about the season, an 8 percent increase over 2018. Simultaneously, there was a 9 percent drop between 2018 and 2019 in consumers claiming they were feeling thoughtful, with only 33 percent of 2019 respondents anticipating a reflective holiday time. 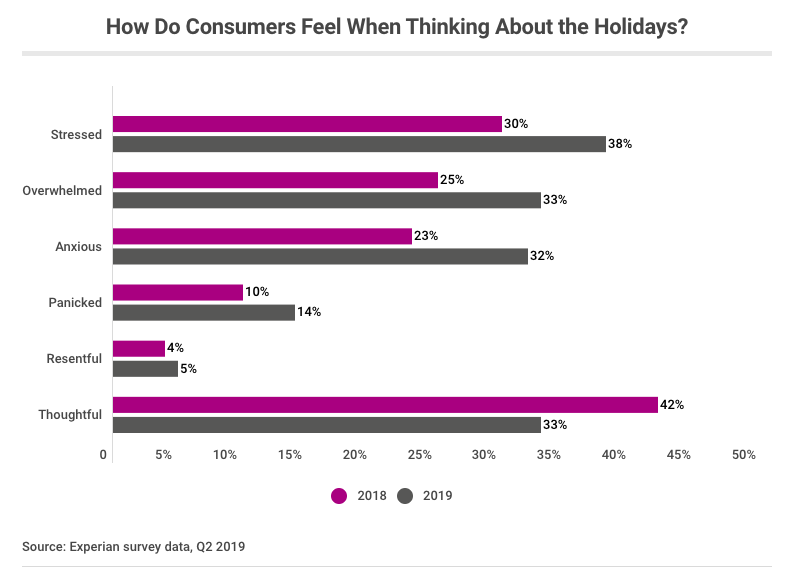 "There’s an ad for Nordstrom Rack about how every day there will be a new deal you can only see on the app or online. Ann Taylor Loft is doing a ‘12 Days of Yays’ with a new offer each day. Chico’s has a ‘Black Friday Every Friday’ email special offer.

"Customers are excited. What is the deal of the day going to be? What’s going to happen this Friday or next?

"I was getting a haircut and the conversation was, ‘What are you shopping for this year. Seven ladies in the salon out of eight were ready to go.

"As much as we like to talk about Black Friday as being a hassle and how people fight, it is still something we look forward to. It is a tradition."

"I'm not sure the short calendar will be that much of a factor. People still have X dollars to spend on Y people.  This ‘pressure,’ if anything, may push sales even a bit more toward online as time becomes an issue and it plays well into the promises many retailers are making about speedier deliveries to compete with Amazon.

"I think the big gainers this year will continue to be subscription plans as well as tech gadgets (especially wireless headphones).

"My guess is that increases in mobile have the potential to create opportunities for upsells and impulse buying as more options magically ‘pop up’ on the screen."

A majority of respondents  (61 percent) told AdColony, the Los Angeles mobile ad platform, it was important to have a mobile device while shopping in store. In addition to running price checks and screening for store discounts, consumers are multitasking, said Matt Barash, AdColony’s head of business development and strategy.

"Mobile plays a pivotal role in everyone's lives today. It's the most intimate, most personal screen in everyone's life. Consumers don't just use their mobile devices for browsing the web and social. They're checking the weather, updating shopping lists, checking prices and stock levels at nearby stores, and occupying their time with mobile games while other people in their shopping group are busy. Each of those activities are in separate apps, and a different channel and context marketers should be taking advantage of in the coming year."

All roads lead to Amazon for a large number of people, suggests an Episerver study.

Among online shoppers, 42 percent indicate they will buy all or most of their gifts on Amazon this year. To capture this eye-opening statistic, Episerver polled some 4,500 online shoppers in global markets as part of its Holiday Online Shopping Trends 2019 report. Episerver, a content, ecommerce and marketing platform, revealed a bright spot for retailers that are not Amazon. There’s a parallel universe of 47 percent of survey respondents who say they will buy few if any gifts on Amazon this season.

How Amazon associates, like this suburban mom, work their networks for the retail giant