One hundred and fifty years ago, husband and wife John James and Mary Ann Sainsbury opened a grocery store on London’s Drury Lane. Sainsbury's now operates more than 1,423 shops (as of March 2018), with the help of 161,000 staff. It has seen two world wars, the industrial revolution and the birth of Campaign.

From its establishment in 1869, the supermarket set out to give customers good value and high quality – something that it has tried to instil in its advertising.

Although the supermarket's earliest print ads date back to 1893, the first advertising agency to be appointed on record was Mather & Crowther (now Ogilvy) in 1915.

During that partnership, Sainsbury’s broadcast its first TV ad to promote its frozen chicken as an inexpensive family meal in 1958 (pictured, left).

Records show the brand worked with Ogilvy until 1977, when Saatchi & Saatchi Garland Compton took over the account.

Saatchi & Saatchi Garland Compton's TV ads for Sainsbury's used the tagline "Good food costs less", which would go on to be used in AMV's print work. 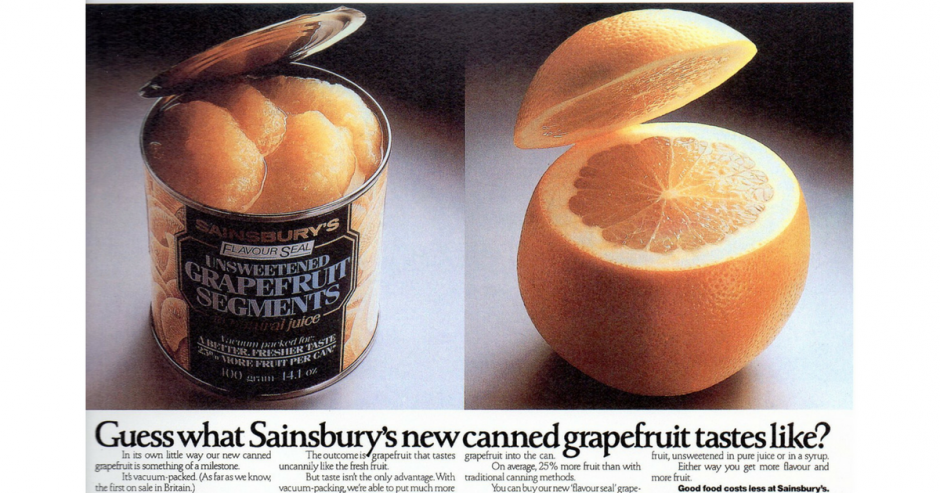 AMV's early-1980s print ads for Sainsbury's focused on quality, with the tagline "Good food costs less at Sainsbury's". The work often included lots of copy describing the food on offer.

Sainsbury's extended its "Good food costs less" motto to its pet-food range in another spot by Saatchi & Saatchi Garland Compton.

Following AMV's merger with BBDO in 1991, the agency produced its 1990s campaign "Everyone’s favourite ingredient", which featured actors and entertainers cooking their favourite recipes using Sainsbury’s ingredients. The work was so successful that Sainsbury’s often sold out of items featured in the ads.

Sainsbury's promoted its loyalty scheme in this funny film by M&C Saatchi. This partnership was short-lived, however, and AMV snatched the account back in 2000.

Sainsbury’s signed Jamie Oliver in 2000 to front its revamped TV advertising. The spots, which showed the celebrity chef whipping up tasty dishes for friends, proved hugely successful. The retailer introduced its "Try something new today" positioning in 2005.

Sainsbury’s relaunched its Taste the Difference premium range with Oliver in 2010, one year before parting ways with the chef.

In his last ad as the face of the brand, Oliver cooked Christmas dinner for a full pantomime cast, including Snow White and the Seven Dwarfs, Captain Hook and Cinderella’s Ugly Sisters.

David Beckham starred in an ad to highlight Sainsbury’s sponsorship of the Paralympic Games.

Sainsbury’s released a Halloween ad as part of its "Live well for less" campaign that featured children in costumes lining up to be inspected by a little witch, who told them to show her "scary".

Director Kevin Macdonald asked families across the country to document their Christmas for a 50-minute film released on YouTube. TV ads were created from the footage, showcasing the best bits and characters.

Sainsbury’s promoted its partnership with The Royal British Legion by retelling the story of the legendary Christmas football match between German and British forces in World War I. The ad prompted mixed reactions. The Advertising Standards Authority received more than 700 complaints about the ad being "distasteful" but did not ban it.

The retailer resurrected Mog, the cat from the children’s book series by Judith Kerr, for its 2015 festive spot.

In 2016, Sainsbury's moved its £60m advertising account to Wieden & Kennedy, ending its 35-year relationship with AMV.

Sainsbury's unveiled what it called a "step change" in its advertising strategy with its first work from W&K. The spot featured a diverse cast of real people joyfully dancing in their kitchen while cooking, set to a specially created track that was released on Spotify. The ad ended with the line: "#Fooddancing is living well/"

The world's toughest food critic isn't Grace Dent, Giles Coren, Jay Rayner or even the Queen: it's a baby. The spot was launched to promote the supermarket’s new Little Ones baby-food range.

Sainsbury's latest work to hit the headlines was its 2018 Christmas spot, even though some noted its similarity to John Lewis & Partners and Waitrose & Partners’ school play spot from earlier in the year. The boy dressed a plug, who jumped into a socket, became a viral meme, but not everyone was amused – 35 people complained to the  Advertising Standards Authority over health and safety fears.