To celebrate the 4A's 100th anniversary, Campaign US compiled the top 10 spots that tap into the past.

A blast from the past always plays well with consumers. This month, Campaign US is teaming up with the 4A's to celebrate the organization's 100th anniversary.

We're counting down the top 100 ads from the past century, including the most memorable uses of historical figures and events. From 15th-century Italy all the way up to 20th-century America, these spots had the best time machines.

"Declaration Descendants" for Ancestry.com by Droga5

To celebrate the first Independence Day since Donald Trump’s election, this powerful campaign starred real Americans who Ancestry.com identified as being directly descended from signees of the Declaration of Independence. The spot ends with a shot recreating John Trumbull’s famous painting of the presentation of the document’s first draft—starkly contrasting the all-white original cast with their diverse descendants.

"Challenger Freedom" for Chrysler by Wieden+Kennedy

This historical-revisionist, "America, f*%k yeah!"-toned spot raised a few eyebrows when it aired during a U.S. vs. England World Cup match in 2010. For one, Chrysler is controlled by an Italian company, Fiat. And for another (a big one), Chrysler builds the Challenger in Canada, not America.

To celebrate the 40th anniversary of the Apollo 11 moon mission, Louis Vuitton gathered "three exceptional figures whose own remarkable personal journeys have taken them into space," as the brand said, to highlight Vuitton’s identity as an ideal companion for travelers and explorers. Perhaps the first SpaceX passengers will carry Vuitton luggage?

The cartoon that launched 1000 spots: released in 1992, "Leonardo" was the very first entry in Red Bull’s iconic cartoons campaign, which Kaster & Partners has now been producing for 25 years—da Vinci-level invention in advertising terms.

"Was Abe Lincoln Honest?" for Geico by The Martin Agency

"Riding West" for Lyft by Wieden+Kennedy

Last week, Lyft released a series of spots that put Jeff Bridges on the Oregon Trail, pontificating from a wagon about the importance of choosing to "ride with the right people for the right reasons." Here’s hoping there’s not an increase in Lyft-related dysentery.

British luxury department store Harvey Nichols poked gentle fun at a series of "great men" with questionable personal style in this 2016 campaign, their first-ever to include TV spots. The company has long used irreverent humor in their campaigns—their 2013 Christmas spot encouraging customers to spend money on themselves instead of their families won a Grand Prix at Cannes.

"Aaron Burr" for Got Milk by Goodby Silverstein & Partners

Way back in 1993, decades before Lin Manuel-Miranda made Aaron Burr (sir) into a household name, this Got Milk ad made light of the high stakes of not having milk on hand at crucial moments. Today, there’s hardly a person in America who doesn’t know the answer to the trivia question in question.

"Whose Beer?" for Coors Light by FCB

The year is 1992. Technology that can insert facsimiles of famous dead people into moving images is all the rage. Coors Light conjures up the Vietnam War by re-enacting a scene from "Full Metal Jacket," complete with R. Lee Ermey, and inserting...The Duke.

"All Is Forgiven" for British Airways by Tinker, Dodge & Delano 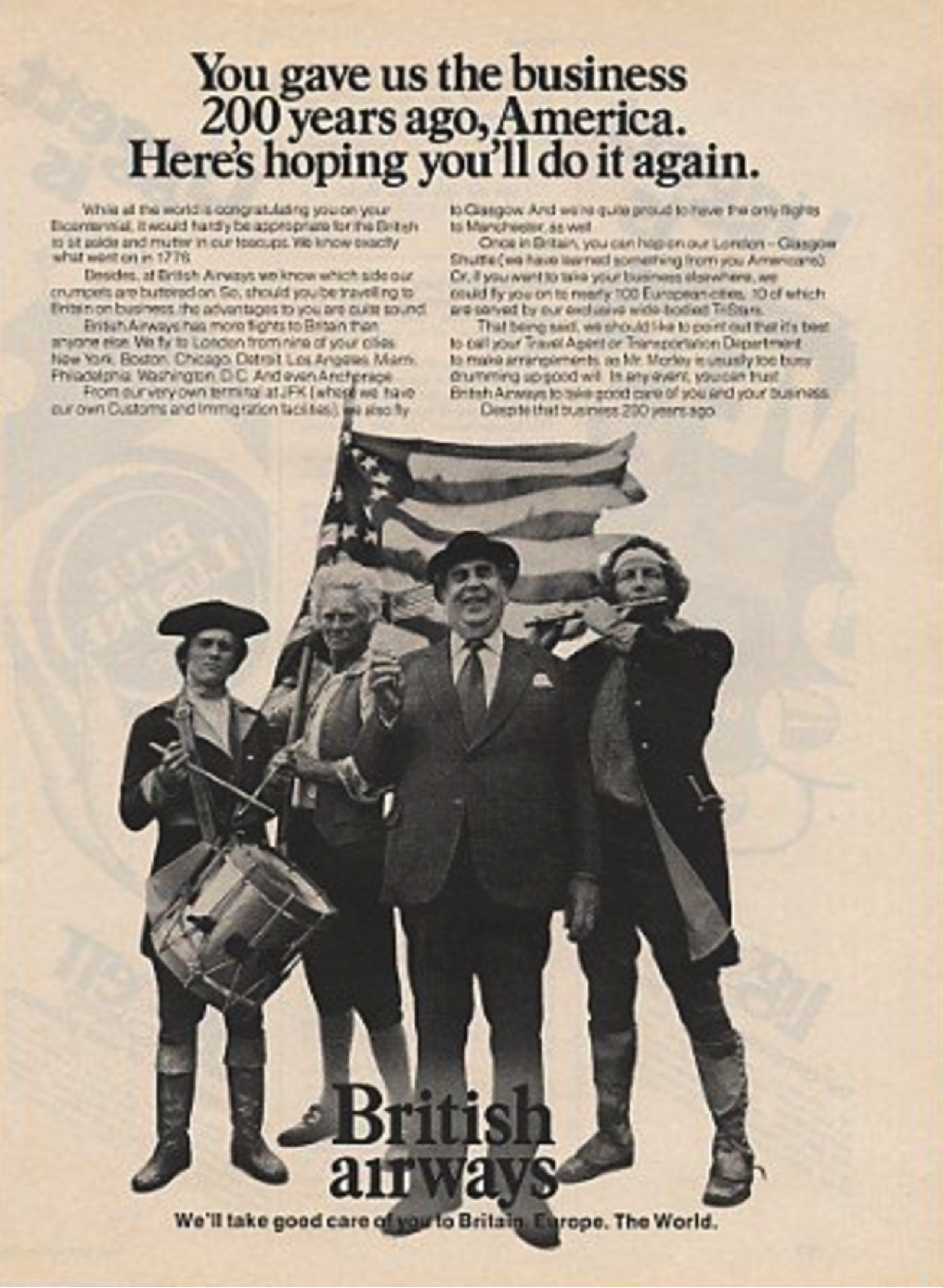 In celebration of America’s bicentennial, British Airways launched a campaign gently ribbing the secessionist Revolution by assuring Yanks they—and their dollars—were still welcome across the pond with no hard feelings. Starring beloved British actor Robert Morley, the print and TV ads implanted their catchphrase in the minds of a generation of Americans: "Come home, America. All is forgiven."