To celebrate the 4A's 100th anniversary, Campaign US compiled the top 10 spots that made us laugh.

Funny ads can be a gamble: If they’re too good, consumers usually remember the joke but not the product, but if they fall flat, that’s all they’ll be remembered for. This month, Campaign US is teaming up with the 4A's to celebrate the organization's 100th anniversary.

We're counting down the top 100 ads from the past century, including the best uses of comedy. These spots, whether weird or charming, nailed their punchlines and left a lasting impact.

"Hump Day" for Geico by The Martin Agency

Ostensibly this ad is an elaborate conceit for a pun about camels, but the real joke is groaning in recognition of the guy in every office who loves making obvious comments about Hump Day (and probably also loves the phrase "TGIF"). But it’s also a smart move by Geico: viral content experts say that ads about specific days of the week get shared on a weekly cycle, no matter how old they are.

"Office Linebacker" for Reebok by The Arnell Group

After an unsuccessful attempt to join the NFL, football player-turned-wrestler Lester Speight made a second career pivot to acting in this series of videos, which only aired once but were downloaded over 7 million times. But despite the spots’ popularity, only 55 percent of viewers recalled that they were ads for Reebok.

"Baby" for E*Trade by Grey

Talking versions of things that don’t talk usually fall into the uncanny valley, but E*Trade’s series of spots featuring a financially precocious baby were a hit. That is, until 2013, when incoming CEO Paul Idzik declared the gimmick "the wrong approach" and canned both the baby and the firm that created him.

"Your Cheatin' Heart" for Pepsi by BBDO

Pepsi’s memorable 1996 Super Bowl ad caught a Coke delivery guy in the act of sneaking a bottle from his competitor, soundtracked by Hank Williams’ country classic. In 2012 the brand revived the premise for another Super Bowl spot, this time with a slightly different, less slapsticky execution and a Jennifer Nettles version of the tune.

"Oh, The Disadvantages" for Benson & Hedges by Wells Rich Greene

Aired in 1966, five years before the Public Health Cigarette Smoking Act nixed TV ads for tobacco products, Benson & Hedges pulled a reverse-psychology humor campaign touting "the lengths people go" to smoke their brand—since their cigarettes are longer, get it?

Manning’s all-American likeability has made him a go-to for TV ads, including this tongue-in-cheek spot ribbing his affability. With such great credit card perks, even creepy threats from other teams’ fans roll right off your back!

"This Unicorn Changed the Way I Poop" by Squatty Potty

Faced with the difficult prospect of selling a product that’s all about poop, Squatty Potty’s CEO ignored the advice of his Shark Tank mentors and colleagues to make a very weird, almost-graphic video. The bet paid off: this spot went viral, netting over 3 million views and a 600 percent jump in online sales.

"Mama Mia!" for Alka-Seltzer by DDB

Background theater and TV actor Jack Somack shot to fame after starring in this commercial. He died a decade later, still best-known for his spice-induced indigestion.

An early entry in the WTF category, this 1998 spot from Cyberian Outpost—one of the first online computer hardware retailers—tried to provoke the PETA set with its attempt to make the site a household name. Of course, no gerbils were harmed in its making, and hardly anyone remembers the Outpost name anymore, since Frye acquired the company in 2001. 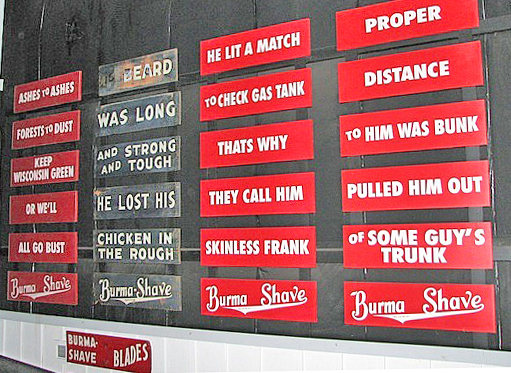 Starting in 1926, Burma Shave put strings of small signs that led up to cutesy punchlines on highways across the country, making the brand one of the most recognizable in America (even though very few of the jokes were about shaving). The campaign was retired in 1963 because cars got too fast for passing motorists to be able to read the signs—although a few reproductions remain on Route 66.