The Cannes Lions has adopted their recommendation that judges reject sexist ads. Are small victories enough under the "Objectifier in Chief?"

One year after creative agency Badger & Winters anonymously released its "We are #WomenNotObjects" video on YouTube, igniting a viral sensation and an ambitious campaign to stop the objectification of women in advertising, it’s not hard to find signs of progress.

To wit: Last week, The Cannes Lions Festival of Creativity adopted founder and chief creative officer Madonna Badger’s recommendation that jurors be advised not to award trophies to ads that objectify women. And Badger, who started the campaign to honor the three daughters she lost in a house fire on Christmas 2011, has become a featured attraction at the industry’s highest-profile events, including the Cannes Lions, 4A's Transformation and the 3% Conference. Clearly, the cause is resonating.

On the other hand, the country has elected a President regarded by many feminists as the worst-case scenario, given his history of sexist name-calling and boasts of sexual assault, unleashing a torrent of anti-PC sentiment that is openly hostile to progressive social causes.

Last month, Badger and Jim Winters, president of the New York agency, sat in a conference room in their Fifth Avenue office to talk about the campaign so far, the support they have (and haven’t) received and how President Donald J. Trump ("the objectifier in chief," as they call him) is making a difference.

The inspiration for the movement is well known. But I’m curious how it actually came into being, particularly the first video.
Jim Winters: We were working for Avon, and they wanted to claim credit for all the good they'd been doing on woman's empowerment. So we started researching what was preventing women's empowerment, and the deeper we read, the more we came across the word "objectification"—how it negates self esteem, prevents women from reaching their full potential. So we did what any great strategic firm does, we Googled it. We typed in three words: "Objectification of women." And what came up? Ads. Hundreds and hundreds of ads. You had to scroll pretty far to get to movies and video games. That really hit us hard. And that's when the light bulb went off.

And that’s when you made the first video?
Winters: Right, which was to raise awareness about the extent of objectification of women in ads. And to give voice to women in the ads. What would they be saying if they were allowed to have a voice and a choice and not be treated as an object? That really broke through and started the momentum.

Madonna Badger: One of the biggest phenomena that comes from the objectification of women is how they begin to objectify themselves. Young women scan themselves once every thirty seconds, which takes up a lot of their cognitive abilities. There have been studies where college women will take a test in a sweater and jeans, and then take the exact same test in a swimsuit, and every single time they will score lower in the swimsuit.

Because the self-consciousness takes up so much mindshare.
Badger: Right. They’re constantly scanning. How do I look? How do I look?

In the 50s it was totally acceptable to show naked woman selling cigarettes [in ads], just as it was acceptable to show big black mammy selling ovens and blackface little boy selling soap. "Have you ever seen a fat Chinese?" Now, of course, the blackface and the racial or ethnic stuff we don't see at all. People get in big trouble even if there's a hint of it. But naked woman are still selling shoes.

Are you satisfied with the industry’s response to your petition? Have a lot of agencies signed?
Badger: The purpose of [the movement] was not only to say we weren't going to do it, but to ask all agencies to not do it. It was that we have the power to stop [objectification]. Whereas gender equality in creative departments, which is at 11 percent, will take time, it doesn't take time to stop treating woman as less than equal and as objects in advertising.

So what kind of reaction have you gotten from fellow agencies?
Badger: We had agencies join us immediately.

Winters:  And some of the first to join were men. Agency leaders.

Badger: Some of the most passionate reactions were from men, specifically clients. They called us and said, "Thank you. As a father, this was so impactful for me." To some extent it gives men permission to fall on the right side of this conversation. It really freed a lot of men up to talk differently in their own workplace about these kinds of subjects.

Winters: The conversation in the agency world around gender blew up in the first half of last year. But the conversations were focused primarily on gender equality in the creative workplace. And that’s a journey that will take years to correct. We were the first to really raise our hands and say the respectful treatment of all human beings in ads, that can happen tomorrow.

Who were the early supporters among agencies and clients?
Winters: Digitas was the very first to raise their hand. The CEO [Tony Weisman] made it the subject of his weekly newsletter internally.

Badger: Havas PR. Grey had me come in and speak to their women's team, which included a lot of men. I've been asked to come to Australia by Ogilvy to follow up for their Australian advertising awards. J. Walter Thompson has definitely been supportive. I mean, we've had so much support.

Are you satisfied with the level of support you’ve gotten from the industry? And one year in, has the support remained consistent?
Badger: Are we happy? Yes. A lot of the support comes by way of speaking engagements. Like speaking at The 3% Conference. That's a lot how we reach people within our industry. A lot of support comes through our social media feeds. And then Cannes, for example, asking me to be the ambassador for the "See it, Be it" program this year. Our second video has been seen 45 million times in 175 countries. I mean, our social media is off the charts.

Are you seeing a difference in the work yet? Particularly from the agencies that have come on board?
Badger: I think that it is a palpable difference of putting women more into protagonist roles, women being treated as whole, human and strong. I don't see as many ads in the US where women are treated as objects. However, we just got our new President ...

Winters: The Objectifier in Chief.

Badger: The Objectifier in Chief. And his mentality toward women that he showed on the bus with Billy Bush is really disturbing. So obviously it's not over.

Have you found that any brands or agencies are hesitant to commit because they’re unsure what, exactly, qualifies as objectification? Maybe they’re afraid of inadvertently crossing the line, or being hamstrung creatively?
Badger: We created three filters around this. They are "props, plastic and parts." Basically, a woman is being used as a prop if she is portrayed as interchangeable with an object, or she is the start of someone else's narrative or has no agency on her own. Plastic is where a woman has been retouched beyond human achievability. And then parts, she has been reduced to a provocative body part to sell the product. 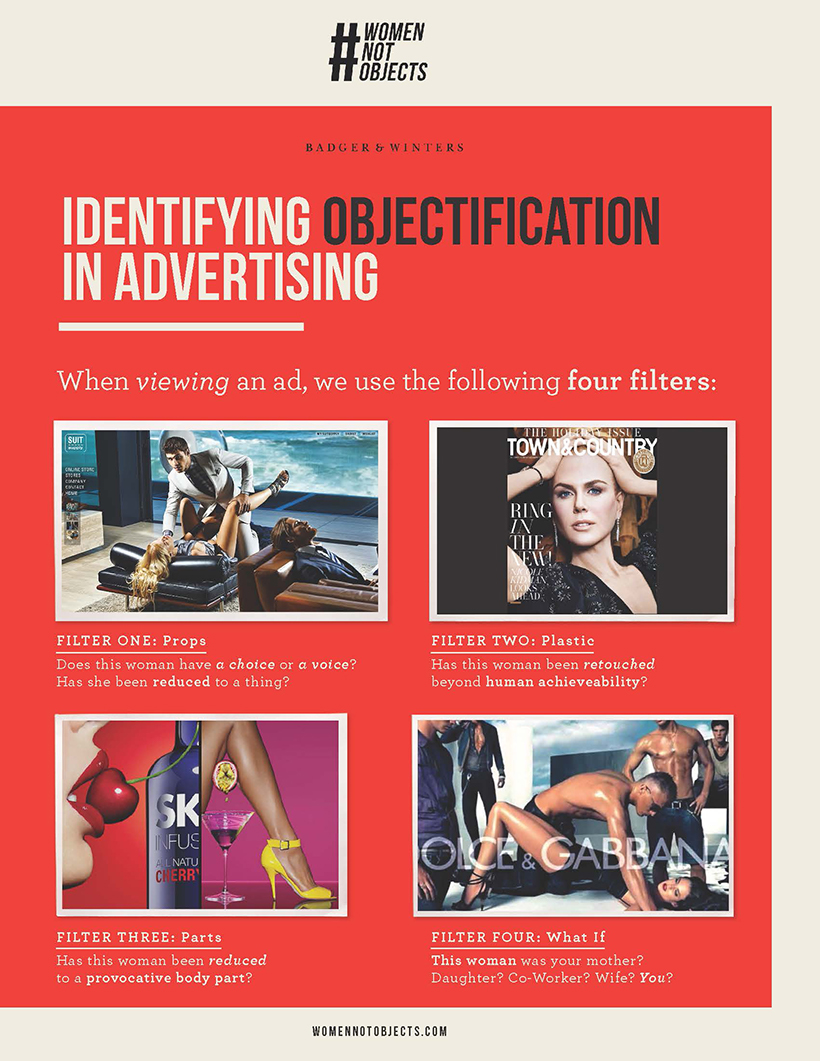 But the way you can really tell is through empathy. If you put yourself in her position—or your wife, or your sister, or your mother—are you going to be okay with that?

People have this whole idea that sex sells. But we did independent research that shows the effect of objectification on purchase intent as measured by the ABX Ad effectiveness index. Across the board, objectifying scored more poorly versus non-objectifying ads. But then it also has an impact on brand reputation. And that's really where we saw the greatest problem, among women and millennials and especially Hispanic Americans. Among these people objectification has a terrible impact on brand reputation. 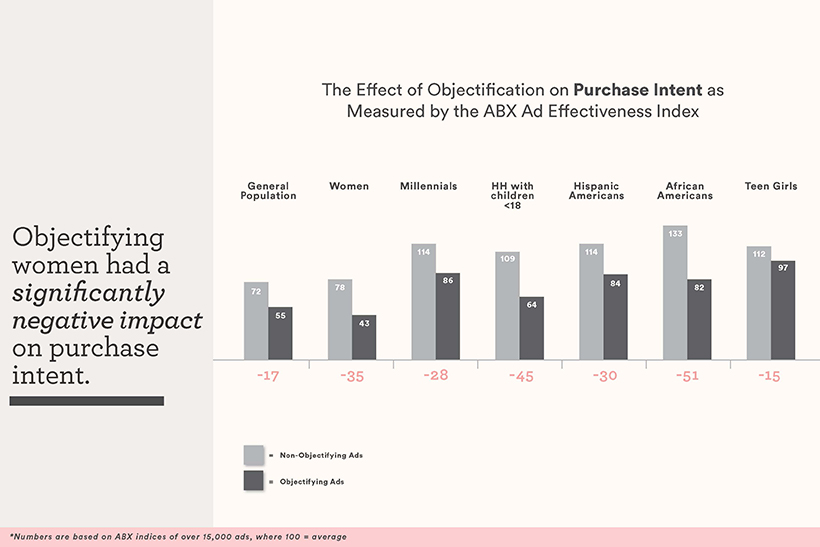 Winters: The way we did it, we created a fair contrast between objectifying ads and non-objectifying ads. We worked with brands that, within a single season, had run an ad that objectified women and an ad that didn't. So it was a very fair apples-to-apples comparison. How does this ad affect consumers in terms of purchase intent and brand reputation versus this one?

Badger: That had never been tested before. And the way it was done [in the research] was that these ads just came up arbitrarily. They weren't shown side by side.

Why do you think that is?
Badger: Fashion and beauty don't test as much as the overall advertising world. They also have this idea that sex sells. Tom Ford, he was practically the star of our first video. Overall, we're seeing that the advertising world is more interested in it, because I think they take a bigger slice of the pie. But beauty and fashion is changing.

Winter: For the first 20 years, our agency was known largely for fashion and beauty, woman's brands. But we know that the only way we can make a difference, aside from making the industry aware of it, is in our work. So there was also a shift in our business to speak to other categories. In the past year we've brought in finance with MetLife. We've brought in health and wellness with Peloton and Lose It! We've brought on travel with Starboard. These are industries and specific clients who hear what we're doing and want to tap into the most effective way to engage with women.

So one year in, you’re satisfied with the momentum?
Badger: I think the momentum is strong. I think that there's been so much going on in this country with the election, and now is the time to be looking at what we do next.

The other thing I think is so important is being positive. There has been so much power and energy going toward this new President. We want to be a part of that, by marching, by calling on our followers to come forward. We've been using our voice that way, and I think that feels appropriate. And right now I think I have up to 20 different speaking engagements this year.

Has the election of Trump given this movement a shot in the arm? Because the alternative is that it could just feel very demoralizing.
Badger: If anything, there’s a feeling now of having something to really push up against. Which I think that we all are happy to have now. That's the positive way to look at it.

Goodby erases women's work from website for 'Day Without a Woman'