The & Partnership London has apologised after an email sent to the whole of its London agency listed the 'Top Five' and 'Bottom Five' female employees by their looks.

In the email, seen by Campaign, a planner described a colleague in his "Bottom Five", by writing: "If you were the last girl on earth. I would use you as bait to trap a wild animal I would be happier fucking."

The planner, who is leaving the agency, was publicly criticised after the email was called out on Twitter.

Sarah Golding, chief executive of The & Partnership London, said: "We do not condone sexism of any kind at The & Partnership London. We have apologised to our staff and others for any offence this email has caused, and we have taken action to make it clear to all employees that we will not tolerate emails of this kind being sent in the future, by men or women at this agency."

Paul Martin, the departing planner who sent the email, has also publicly apologised, saying that "all the women mentioned in the email are friends and people I very genuinely love and respect. After checking with them to make sure they were happy to be mentioned in the email (as part of what I erroneously considered at the time a ‘joke’) I thought it was enough to validate me pressing ‘send’. It wasn’t and should never have been."

He continued: "The email was meant to be a stupid, ironic attempt to subvert and mock the sexist ‘Top Five’ emails that have been sent around agencies for many years, but I have totally missed the mark and take full responsibility."

The & Partnership is not the only agency in which these "Top Five" and "Bottom Five" emails have become a toxic tradition, being sent when employees are leaving agencies. However, Campaign understands that a combination of the efforts of senior women and in one case intervention by HR have ended the tradition at these agencies.

Despite their long history this is the first time such an email has been made public; a reflection of the rise of transparency fuelled by social media and the impact of the TimesUp and #MeToo moments.

The email was publicly called out on Twitter by Cindy Gallop, the founder of MakeLoveNotPorn, using the #askmoreofhim hashtag and tagging Johnny Hornby, the founder of The&Partnership.

Gallop told Campaign that it is "absolutely astounding" that in March of 2018 anybody could possibly have thought that this email was remotely acceptable as a public missive.

She continued: "The entire email stands as a huge indictment of the white male-dominated UK ad industry that has cultivated and allowed to flourish this truly disgusting industry culture of sexism, racism, misogyny, sexual harassment and objectification of women (replicated in our industry around the world), that continues to keep women out of leadership and power."

Pointing to her speech last week at the Guardian's Changing Media Summit, she reaffirmed her belief that "If you're not at the table, you're on the menu.’

She explained: "We are not at the table because we are on the menu. This culture comes from the top. I want to see the guilt, self-examination, soul-baring and determination to change that Paul Martin is now exhibiting, take place in the industry leaders whose appalling examples made him think writing something like this was OK in the first place." 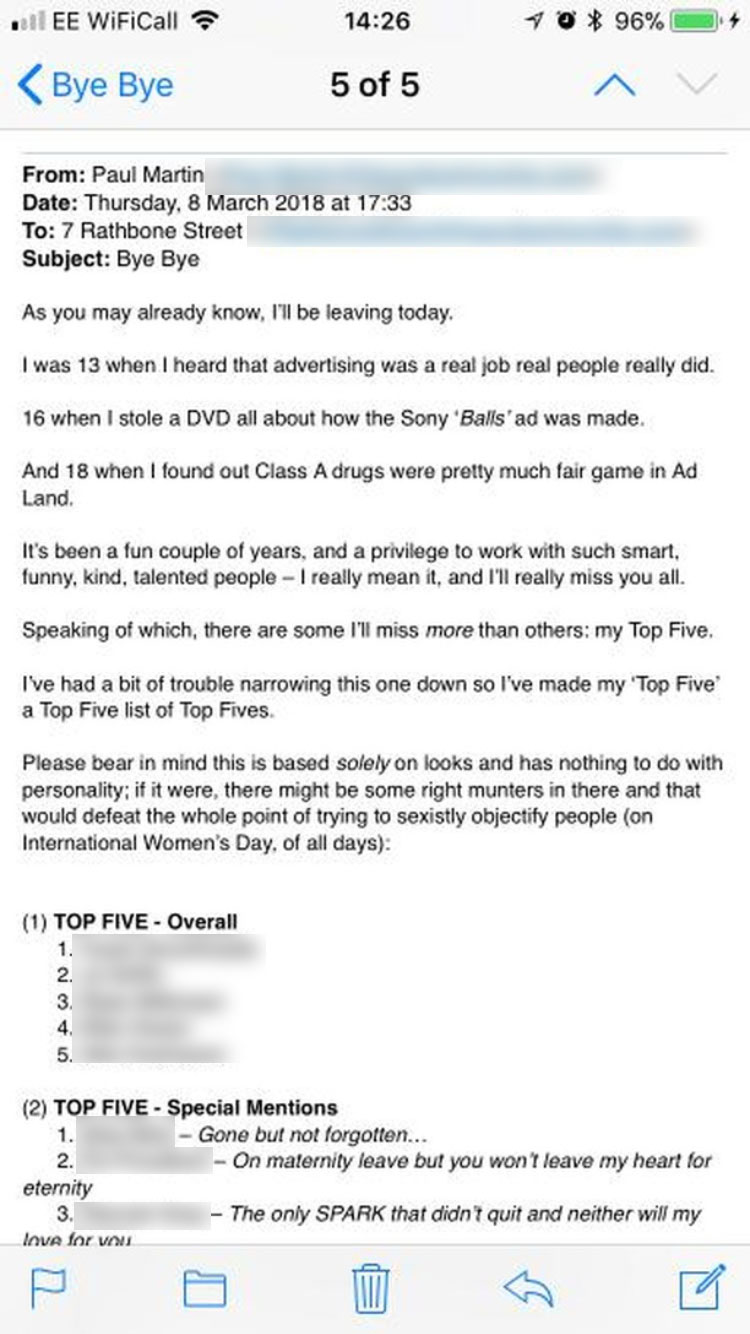 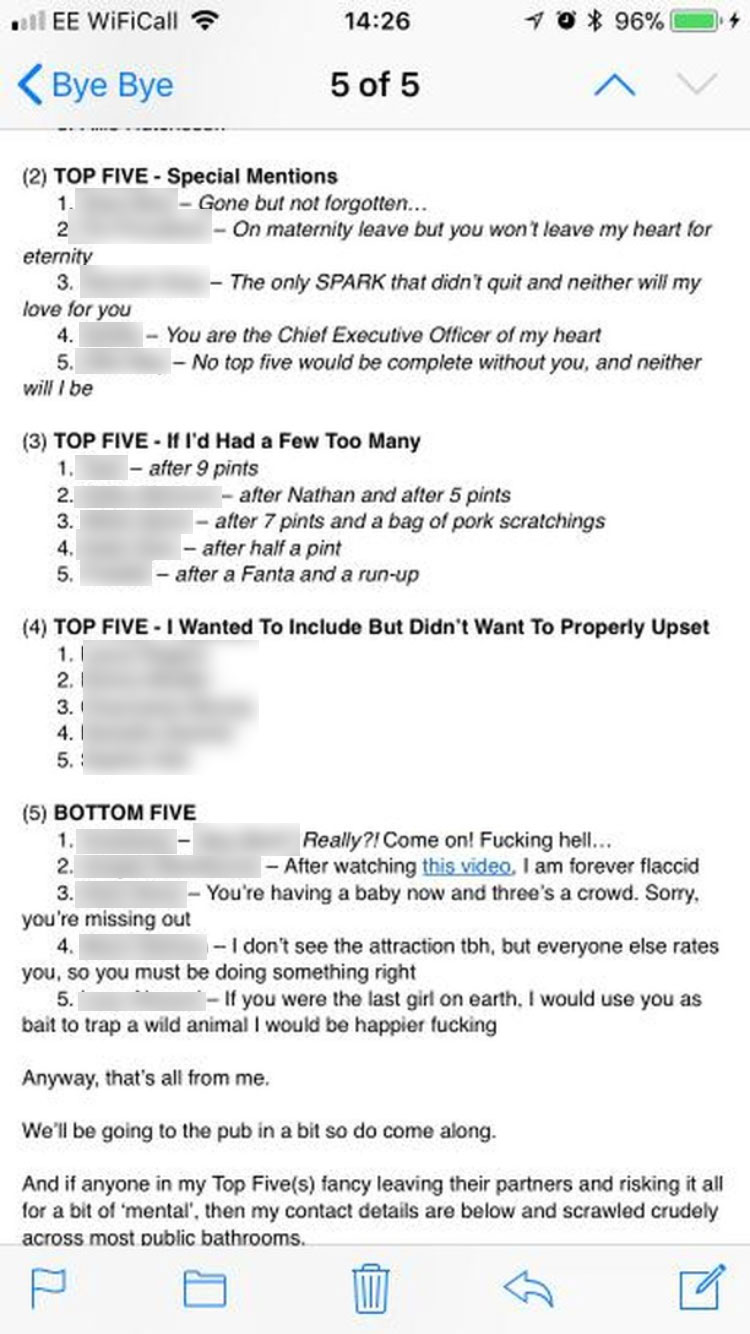 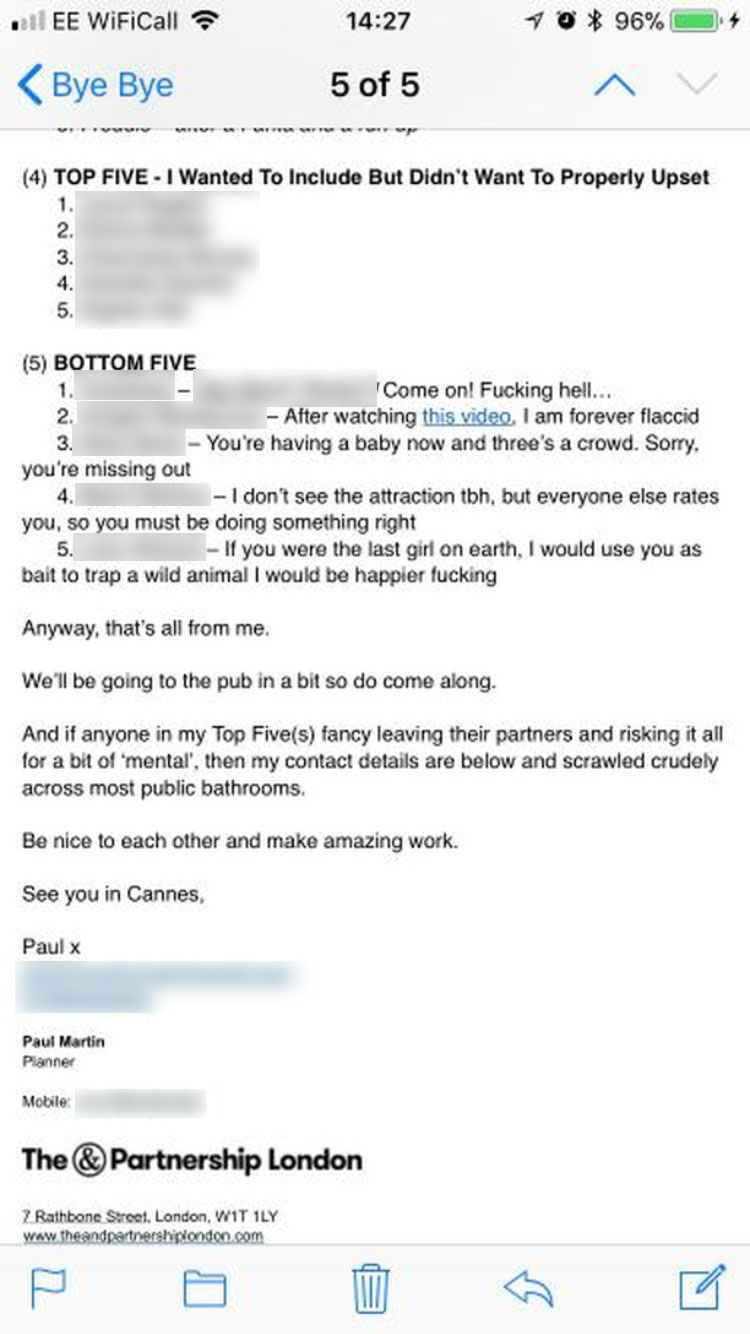 Johnny Hornby, founder of The & Partnership, responded to the criticism on twitter over the weekend this morning, writing "Our CEO Sarah Golding was first to spot and condemn the email sent Friday, she had Paul publish an apology and stopped the Top 5 email tradition at her agency and I am sure as leader of the IPA will stop it altogether."

Sara Keegan, a strategist at 18 Feet & Rising, and Robyn Frost, a creative at Poke London, have called on agencies to change the narrative, suggesting  that departing employees share instead a list of their top five most admired women in advertising.

Today the Advertising Association, Nabs and Wacl joined forces to launch a new initiative called timeTo to address the problems of sexual harassment in the advertising industry.

Update: Following the publication of this story, Paul Martin has provided the following clarification:

"I messaged everyone mentioned on the email privately apologising first and then wrote a statement which I published on Twitter. I was not asked by anyone, let alone anyone at The & Partnership, to write a response.

"Once I sent the email around, Sarah Golding was the first to reply saying: 'We shall miss you Mr Martin. Thank you for everything. Take care, Goldie'"

He added: "However, this obviously does not excuse what I sent and take full responsibility.

"It might sound prosaic but I’m glad that these emails have stopped - it’s been a long time coming."

Campaign has seen the original email written by Golding. When asked to comment on her original response to Martin's email, she said:

"When I received Paul’s leaving email I was out of the office attending the Women of Tomorrow awards. I replied to him with a standard 'thank you' for your service, without reading his full message. Having done so subsequently, I immediately emailed the agency and then called the agency together to discuss both this email, and the whole premise of leavers' emails, and have ensured nothing like this will ever happen again at The & Partnership London.

"Never have I condoned or encouraged such emails as appropriate behaviour, nor do I believe they reflect the culture of the agency. Most leavers messages are gentle, warm and affectionate of colleagues and time spent here, but Paul’s went much further and shines a light on the dangers of a practice that no longer has a place in our agency or industry."

Justin Tindall: my 'bored with diversity' comment was wrong

Why being 'bored of diversity' is not good enough: a response to Justin Tindall

'This is bullshit': an open letter to adland from a working mum